LOS ANGELES, Calif. — Kevin Glavin Publishing announced today the release of “Rock Star’s Rainbow” (ISBN: 978-0-9825466-0-4), a new novel chronicling a recent and mysterious scandal involving one of the nation’s most cherished “icons.” The far-fetched story begins in August 2009, when a renowned entertainment reporter is thrown out of a plane over Los Angeles. At the time of his unfortunate death, he was completing a manuscript detailing the strange personal life of the most secretive megastar of our time — Rook. Luckily, this work in progress was rescued, although the details remain obscure. Now, assembled here is the sought after expose of the infamous rock star, searching for his lost innocence. 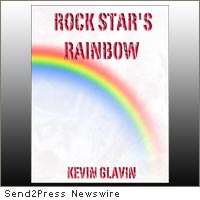 The quixotic adventure journeys from L.A., to Amsterdam, to India, and back. Along the way, Rook struggles with celebrity excess, re-ignites with his old flame, gets mixed up with the mafia, and must rescue the daughter he never knew he had. From the heights of hedonism to the depths of despair, this topical parody explores the beast of fame.

Glavin, who supposedly found the surviving draft of the book on a plane, was struck by the enigmatic nature of the work while reading it at the roulette table. He decided then and there, after losing on 00, that it was notable and should be made public, and not remain in Vegas. Says the editor: “After consulting with counsel, I have determined that it is worth the gamble to publish this manuscript for the public’s enjoyment, edification, and potential horrification.”

Available for $14.95 through Amazon.com and BarnesandNoble.com . For a PDF preview and more information: www.rockstarsrainbow.com and www.kevinglavinpublishing.com .

About the Author:
Kevin Glavin’s ancestors hail from the Emerald Isle; he hails from the Windy City. After receiving his BA in English and MAT in English Education from the University of Iowa, he traveled like his forefathers — westward. Mr. Glavin has taught for some thirteen years, mostly at Claremont High School, in Claremont, California. In December 2009, Mr. Glavin formed his own publishing company to learn the entire art of bringing a work to market, in print and digitally, and to maintain creative freedom. He lives with his wife Brenda in Orange County.