eNewsChannels COLUMN: The UN’s International Mother Earth Day, in solidarity with Earth Day, following January’s Snowdance Phenomena that saved Western ski areas from the “driest winter in 130 years,” helped inspire billions of Green Acts in April. This is paving the way for more phenomenal progress at RIO+20 on June 20-22. 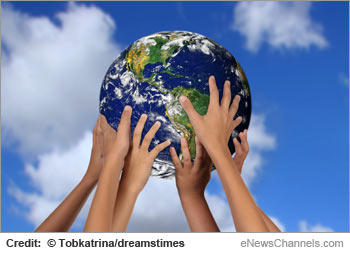 2012 could have been catastrophic for U.S. ski areas but for these Snowdances led by Native American Elders united with the Vail, Park City and Tahoe’s communities. Coverage by AP, the Wall Street Journal, Washington Post, helped many more experience that Mother Earth is a sensitive, compassionate being, which was officially recognized by the UN’s 192 countries in 2009 through its International Mother Earth Day on April 22.

Since world scientists expect more droughts, the UN encouraged our Native American Olympic Team Foundation to spread this snowdance phenomena story to inspire communities worldwide to wake up as it did me, to dedicate ourselves to living in more harmony with Nature, including through tribal outreaches this pivotal 2012.

With the help of U.S. SnowSports Industry’s President, David Ingimie connecting us to ski leaders globally, resorts across the U.S., Canada, South America, Austria, New Zealand, Russia and China, were glad to share their spiritual and practical snow secrets for the greater good. We also learned that a snowdance saved the 1960 Squaw Valley Olympics, along with Utah and Vancouver’s, yet Sochi Russia won’t likely need one.

The consensus of the UN’s “Harmony with Nature” Interactive Live Global Dialogue Webcast in April was: Science united with Ancient Wisdom is key to regenerating Mother Earth. Therefore our 50 year partnership between the Native American tribes and ski areas, as well as those internationally, have turned out to be a model for June’s pivotal RIO+20 Earth Summit.

Together with May’s U.S. Golden Eagle Eco Award winners, Maine’s Mount Abrams, Washington’s Steven’s Pass and Aspen – all tribal connected – we are presenting the best solutions of the SnowSports World, along with the Elders’ recommendations for RIO+20 to consider. And with the grace of God they will prioritize them along with a timetable since what they do or don’t do at this June 20-22 Earth Summit will affect the longevity of snow sports give our planet is transitioning to a warmer climate. But we each have the power to enhance the moisture and snow climate of our communities by planting fruit trees, which as you will see are FREE in the U.S. and Canada, along with planting assistance!

See why the Elders say it is more important than ever to take a moment to thank Mother Earth for the snow blessings, since snow melt is critical for our water, food and fire prevention. Plus for lovingly nurturing us for eons, despite horrific mistakes we have made here at Earth School.

This year the tribes say Mother Earth is uniquely cleaning house, so it is critical to boldly act NOW. Bless the tribal Elders, shaman, mystics, and as you will see, ingenious youth and billions of you, especially on Mother Earth’s Day, for helping transform 2012, “this Mother of All Years,” into a radiant new era.

While our documentary will air soon on U.S. and world TV, thanks to glowing feedback by ski area owners like Ellen Purcell of Portillo Chile, on our pictorial script and research, we are making it available in print via PDF.

Together multi-culturally, we are joyfully snowdancing in a New Dawn for Mother Earth!

The documentary starts with a 30 second YouTube documentation of Vail’s snowdance phenomena on 1/7/12 and powder skiing on 1/8/12.

Since world scientists expect more droughts, the UN encouraged our Native American Olympic Team Foundation to share this phenomena with communities worldwide to wake up and inspire them to live in more harmony with Nature.

In spreading the story we learned some of the practical and spiritual secrets that resorts across the U.S., Canada, South America, Europe, Arctic Circle, New Zealand, Russia and China, are using to help inspire abundant snow and regenerate Mother Earth, which they were glad to share. In North America we learned that the snowdances also saved the 1960 Squaw Valley Olympics, in addition to Utah and Vancouver, but Russia will likely not need one.

See why it is more important than ever to give our Earth Mother a moment of thanks for compassionately restoring snow to so many resorts this season and for lovingly nurturing us for eons, despite horrific mistakes we have made here at Earth School.

This year the tribes say Mother Earth is uniquely cleaning house, so it is critical to boldly act. Bless the tribal Elders, shaman, mystics, and as you will see, billions of you, for helping transform 2012, “the Mother of All Years,” into a radiant new era. That is why this research, along with other Elders’ Recommendations requested by the UN, is critical to be able to streamline getting consensus and implementation timetables at RIO+20.

The “Snowdance Phenomena” documentary will air soon in the U.S. and world.

A special thanks to so many of you for being great “Earth Mothers,” as my (wonderful earth) dad used to honor me on Mother’s Day! Here’s a tribute to all Mothers and Mother Earth, embodied in this video of the Mother Trees of the forest: http://www.karmatube.org/videos.php?id=2764 .

Article is Copr. © 2012 by Suze Chaffee and originally published on eNewsChannels.com – all commercial and reprint rights reserved. Illustration credit: © Tobkatrina/dreamstimes.