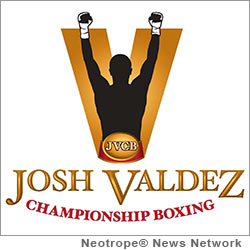 “Fighters need championship investing and benefits, just like they need championship trainers,” said Valdez. “The reason I formed the company is simple: These fighters put it all on the line for the public’s entertainment, but at the end of their careers they face the ramifications alone. We want to make sure they will be champions outside the ring as well.”

Valdez brings tremendous experience and credibility to the firm, having owned and guided one of the nation’s most successful health consulting firms for the past four years; Right Way HealthCare Consulting. Valdez, who has Doctorate degree in Business Administration (DBA) and graduated Magna Cum Laude, has held many high-profile, leadership positions, including as Senior Vice President of Health Care Management for WellPoint and as an appointee by President George W. Bush to be the Director of Western U.S. and Pacific Territories for the U.S. Department of Health and Human Services (DHHS). A lifelong boxing advocate, Valdez was undefeated as an amateur, and his Father, Ray Valdez was also a fighter.

Garcia is a household name to boxing fans, having been named Trainer of the Year last year by Sports Illustrated and The Ring Magazine, and was a very successful boxer (34-3) before embarking on a successful training career. Garcia currently trains WBA flyweight world champion Hernan “Tyson” Marquez and, just last year, guided both Brandon Rios and Nonito Donaire to the top of The Ring’s lightweight and bantamweight rankings. Roberto also trains, former undisputed middleweight champion Kelly Pavlik, and top welterweight contender, Marcos “El Chino” Maidana. He also co-trains his younger brother, Miguel Angel “Mikey” Garcia along with their father Eduardo Garcia. There is a great buzz around Garcia because of the up-and-coming stable of fighters under his tutelage. There is every reason to expect that he will have many more champions over the next couple of years.

Josh Valdez Championship Boxing is in the process of signing many notable fighters that will be announced on the company’s new website when it launches at the end of the year.

Current Builders is pleased to announce that Roberto Aguiar has been promoted to Chief Estimator Aug 2, 2021