OJAI, Calif. — Effin Press(TM), an independent publisher in California, is pleased to announce the publication of “It’s FaVre Not FaRv” by Jon Christopher, J.D. (ISBN: 978-0-9819177-0-2; $14.95 U.S.). A celebration of language that encompasses wit, humor and satire, “It’s FaVre Not FaRv” takes to task issues of celebrity, race and politics in America while providing whimsical and lyrical insights into the art of tilting at windmills. Subtitled: How Bradd FaVre, the NFL and the Media let America go to hell in a jockstrap, “It’s FaVre Not FaRv” is a hilarious burlesque centered on the retired now un-retired football great and once Green Bay Packer now New York Jet, Bradd “I can’t say my own name right” FaVre. 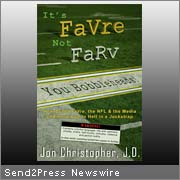 Please Note: The author will stop calling Brett “Bradd” when FaVre, the NFL and the Media cease calling FaVre “FaRv.”

The last time “FaVre” was pronounced correctly in public by someone associated with the NFL or the Media was in 1991 when then NFL Commissioner Paul Tagliabue introduced FaVre, a 33rd over-all draft pick, upon FaVre’s induction into the NFL.

Truly one of sport’s stranger-than-fiction stories is how for the last seventeen years the NFL and the Media have been unabashedly complicit in the mispronunciation of FaVre’s name; and this at a time commensurate with what many social commentators have referred to as the “Dumbing-Down of America.”

About Jon Christopher, CHOICE MAGAZINE, a publication of the Association of College and Research Libraries, a division of the American Library Association, wrote:

“Jon Christopher has a voice and a style which are very much his own and owe nothing to fashionable trends. He is not of the hard, direct and simple breed of poets so common in his generation, but is capable of subtle and extremely sensitive feelings, projecting his ideas in richly varied and flowing rhythmic structure. He is someone to watch for.”