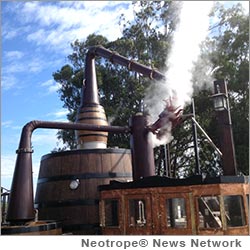 MONTEREY, Calif. /eNewsChannels/ — Lost Spirits Distillery – a tiny California distillery manned by just its two founders – announces the unveiling of their dedicated single malt distillery. The project, which has been under wraps for some years, is an American mom and pop distillery unlike any other. And their first release – Leviathan I – is peated to a staggering 110ppm. Attaining phenol levels only accomplished by two distilleries in the past.

The unique single malt has a ferocious personality all its own. Showing as much spice influence from the French oak casks as it does smoldering embers from the massive peat influence.

The whiskey was fermented from California grown malted barley smoked with peat harvested from bogs in central Canada. Maturation took place in late harvest cabernet sauvignon casks from Napa Valley. The production was done in house by Joanne Haruta and Bryan Davis using equipment they made from scratch and casks they hand selected in Napa.

Haruta and Davis are veterans of the micro-distillery movement. In 2007 the duo moved to Spain where they founded a small distillery that won much acclaim for its products: Obsello Absinthe and Port of Barcelona Gin. In 2009 they returned to the United States to pursue a dream – building a whiskey distillery from scratch. Shunning contractors the two literally hand made everything from the stills to the foundations and Japanese gardens.

Lost Spirits Distillery is the first dedicated peated single malt whiskey distillery in the United States. The artisan distillery produces specialty American single malt whiskeys created for the global community of whiskey enthusiasts. The distillery is situated in beautiful Monterey County, California just 3 minutes from the Pacific Ocean. For more information visit us on the web at http://www.lostspirits.net/ .