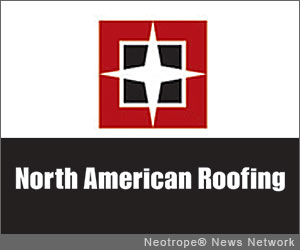 ASHEVILLE, N.C. /eNewsChannels/ — NEWS Apr 11, 2013: North American Roofing strengthens its national position as one of the largest commercial roofing companies in the U.S. with the award to participate in the National Joint Powers Alliance(R) (NJPA), through their premier construction program with ezIQC(R), which helps municipalities find sources for construction and repair facilitating the competitive bid process on behalf of their members.

North American Roofing can now offer its services to the public sector with what are known as “job order contracts” or indefinite quantity construction contracts in which contractors bid based on a catalog of pre-priced tasks. The first phase of the rollout is for 14 states, with all 50 states included by the end of the year.

For many municipalities, cooperative purchasing has long been used to lower costs for office supplies such as paper, staples and paper clips. The ezIQC construction procurement system has been in place for state governments, school systems and other public sector entities for over twenty years, according to the company’s website and the Gordian Group who administers the system, and brings that same power of group buying and helps shed the red tape of traditional procurement for often high priced on-call facility repair and construction.

National Joint Powers Alliance (NJPA) is a public agency and member-driven service cooperative that serves over 50,000 members, according to their company information. NJPA offers a multitude of contracted products, equipment and service opportunities to education, government and non-profit entities.

“North American Roofing is a great addition to NJPA/ezIQC: Their experience and longevity in the marketplace, awards for quality and workmanship and their prominence in the industry – coupled with the full range of vendors they bring with them – can go a long way toward streamlining the procurement process for municipalities on tight budgets and timelines,” according to Clint Owings, National Program Manager, The Gordian Group.

“Much like food cooperatives that most people know of, NJPA works in the same way, establishing business and service alliances between member ‘buyers’ and contracted ‘suppliers’ through competitively bid contracts,” Brian Verble, President and CEO of North American Roofing said.

Communities benefit in many ways. The projects are started and completed faster, and the cost of the projects is already within the scope of the budget, since NJPA and ezIQC have already vetted the competitive bid process.

North American Roofing has been involved with public sector projects for schools and county projects in the past, but nothing on this scale. Verble added, “Though we’ve been nationally known for our quality and workmanship, which is how we’ve become the third largest and respected commercial roofing company in the U.S., we’re excited to be adding the public sector to our portfolio through this new NJPA/ezIQC relationship.”

A pioneer in the commercial single-ply roofing industry since 1979, North American Roofing specializes in commercial and industrial low-slope roof systems and is the 3rd largest commercial and industrial roofing company in the U.S. In addition to installation, repair and preventative maintenance, the company continues to expand its operation, which now includes the North American Roofing’s Energy Services Group specializing in integrated solar roofing and energy systems by designing and installing high caliber solar arrays. Employee-owned and in continuous operation for three generations, North American Roofing has installed and serviced more than 900 million square feet of roofing on more than 19,500 facilities across the United States.

News Summary: North American Roofing strengthens its national position as one of the largest commercial roofing companies in the U.S. with the award to participate in the National Joint Powers Alliance (NJPA), through their premier construction program with ezIQC, which helps municipalities find sources for construction and repair facilitating the competitive bid process on behalf of their members.

Published on eNewsChannels.com on Apr 11, 2013. This version of news announcement is Copyright © 2013 eNewsChannels™ and the Neotrope® News Network – all rights reserved. Reproduction in whole or in part for commercial purposes is prohibited unless under license. Made in the USA.