LOS ANGELES, Calif. — The recent thriller by author, Mark Biskeborn, “A Sufi’s Ghost,” has won a great deal of attention with its controversial characters. A Sufi’s Ghost, a novel by Mark Biskeborn, dramatizes how a woman flees an abusive, polygamous marriage in Saudi Arabia and reveals secrets of Islam.

Larry Larson honed his skills in the Green Berets and then took a case officer’s job with the CIA. When top CIA officials order Larson to terminate his partner in Saudi Arabia, he instead takes an early retirement. His wife had already left him. His son won’t speak to him. Eager to make up for lost personal life and time he decides to return to Saudi Arabia to hunt down high value targets for their bounty rewards. No sooner does he arrive and his prime source of information, Prince Nabir is assassinated. 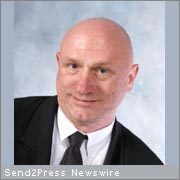 Before his death Nabir passes his notebook and rosary on to his friend Carmen when she desperately needs to leave Saudi Arabia. The notebook guides her to seek help from Larson.

By the time Carmen finally finds Larson in a Riyadh hotel, she has already committed two capital crimes: leaving her husband’s house without permission and driving a car alone. She informs Larson that the police suspect him of Nabir’s murder. Realizing that he must also flee the country, he teams up with Carmen. Together, they leave Riyadh and head east, eluding the police. Riding with Larson, Carmen studies the notebook and rosary that Nabir left for her. She discovers that the rosary and notebook contain pieces of poetry written in ancient Sufi codes that reveal the location of a lost chapter from the Koran, one that could undermine the political and religious authority of patriarchal Islam. Powerful Muslims want to take possession of this lost document at all costs.

The author, Mark Biskeborn, has been a contributing writer for several blogs, such as The Smirking Chimp and OpEdNews, among others, and has received a swarm of comments from his regular weekly writings. Amazon Shorts features several of his short stories recently.

About Mojave Winds and Mark Biskeborn
“A Sufi’s Ghost,” a novel by author Mark Biskeborn, delivers the sequel to his first novel, Mojave Winds. Larry Larson struggles to regain his lost personal life after years of service to his country.

The author is a long time resident of California, and has also lived and worked many years abroad. He has contributed many non-fiction articles, essays, and book reviews to magazine publications and blogs. He also has had several short stories featured on Amazon Shorts.