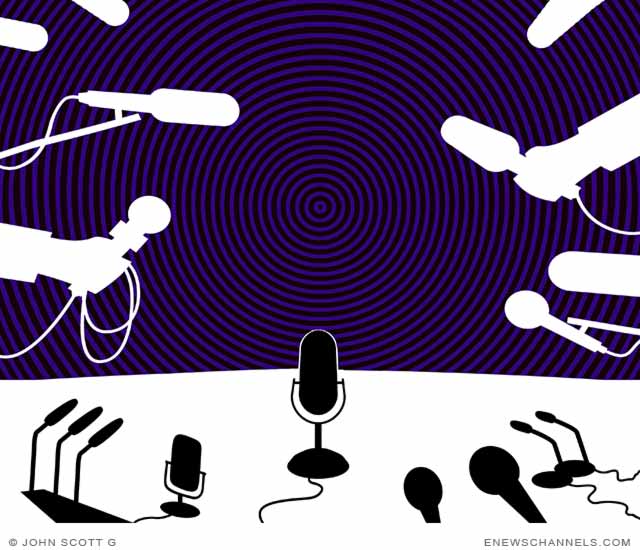 We are witnessing a media meltdown in the wretched coverage of the 2016 presidential race. Substance and policy positions are ignored in favor of demagoguery, bombast, stunts, and stupidity — and America is the worse for it.

There are two serious candidates for president: Hillary Clinton and Bernie Sanders. Adding to the mix is a non-declared candidate, vice president Joe Biden, who is also qualified but is still working through the grief of the recent death of his son and may not run.

Arrayed against them is a huge field of rightwing nutjobs, demagogues, war mongers, and greedwhores, none of which could charitably be called a fully-formed human being.

But does our gargantuan multi-platform media machine pay attention to the positions of the candidates? No. To facts? No. To substance? No. To ideas? No.

Is the media serving its purpose of providing the citizenry with information necessary for reasoned decision-making leading to good government and a sane society?

Bernie Sanders’ website lists his positions on 11 topics. Hillary Clinton’s website covers a lot of the same ground while breaking things out into 23 topics.

By comparison, Donald Trump’s website has a “Positions” page that contains one topic while his fellow crypto-Nazis have position papers that range from prevarication and distortion to outright lies.

Over and over, the media ignores the issues of grave concern to the United States. Some examples:

* Sanders is against the mountain of money that is perverting our politics: “Freedom of speech does not mean the freedom to buy the United States government. Oil companies, pharmaceutical manufacturers, Wall Street bankers and other powerful special interests have poured money into our political system for years. In 2010, a bad situation turned worse. In a 5-4 decision in the Citizens United case, the Supreme Court opened the floodgates for corporations and the wealthy to spend unlimited and undisclosed money to buy our elected officials. The Supreme Court essentially declared that corporations have the same rights as natural-born human beings.”

But the media focuses on Donald Trump’s racist comments.

* Clinton states she favors the overturning of the Supreme Court’s horrific Citizens United decision and to ending the use of unaccountable political contributions. “Hillary will appoint Supreme Court justices who value the right to vote over the right of billionaires to buy elections. She’ll push for a constitutional amendment to overturn Citizens United in order to restore the role of everyday voters.”

But the media focuses on a fake scandal about email servers.

* Sanders is battling the disastrous wealth inequality in this country. “The reality is that since the mid-1980s there has been an enormous transfer of wealth from the middle class and the poor to the wealthiest people in this country. That is the Robin Hood principle in reverse. That is unacceptable and that has got to change.”

But the media focuses on Donald Trump’s xenophobic comments.

* Sanders recognizes that “We are in the midst of an ongoing unemployment crisis, and we must take bold action to address it.” As stated on his website, Sanders “Introduced legislation which would invest $1 trillion over 5 years to modernize our country’s physical infrastructure, creating and maintaining at least 13 million good-paying jobs while making our country more productive, efficient and safe.”

But the media focuses on Donald Trump’s hair.

Meanwhile, the media remains interested in non-essentials while almost totally ignoring such madness as the Jeb! plan for huge tax breaks to the wealthy, the insulting Social Security plan of Chris Christie, and the psychosis behind Rand Paul’s budget plan. Or, for that matter, the faulty math of any GOP fiscal proposal.

Making matters worse, the media has bowed down to a silly “balanced coverage” conundrum with the result that they treat sanity and lunacy as equals. They present the views of progressives and regressives as if their positions have equal worth. They treat scientific facts and conservatard “think” tank blather as if it all deserves the same amount of consideration.

The media apparently cannot just talk to someone with progressive ideas that will propel the nation forward — instead, they debase everyone by giving equal time to a cretin or liar spouting daft and fact-free conservatisms.

When a RWNJ posits a plan already proven to be defective or detrimental — be it war mongering or any of their treacly trickle-down economic voodoo — the media becomes complicit in the crime by refusing to call them out on it.

The media repeatedly screws up in two other ways. First, the media is ignoring the dangers inherent in the racist, misogynistic, homophobic, xenophobic, theocratic, plutocratic, and Fascist notions of The Treason Party.

Second, they are bypassing or trivializing the aims and ideas of Sanders and Clinton with no discussion of how their aims and ideas will help the United States.

It’s bad enough that Conservatives want to harm America, but it is unconscionable that members of the media abet them.

Not covering the facts surrounding the GOP versus the USA (#GOPvUSA) is a massive media fail.