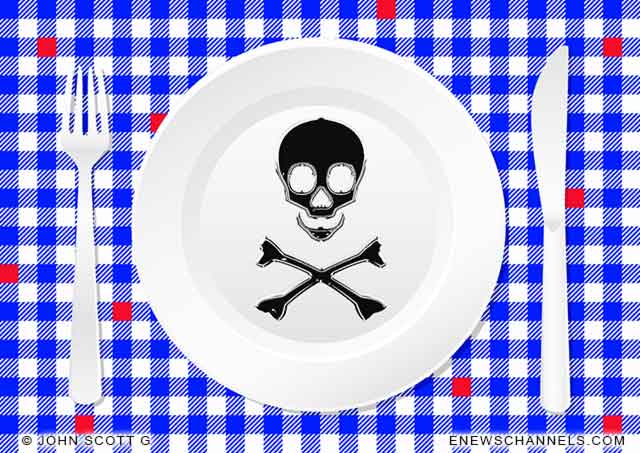 Ahhh! The aroma is so mouth-watering that you can almost taste the delicacies being created in the kitchen. Thanksgiving dinner is a cherished family tradition full of good times and good food — but often spoiled by your weird uncle spouting crap he heard on the Fox Fake News channel.

Some things seem to go together well. Classic combos include bacon and eggs, bread and butter, wine and cheese, pizza and beer, spaghetti and marinara sauce.

But some things just don’t mix. Like decent people and Conservatives.

So it is always puzzling to me why many families keep inviting their creepy uncle Joe-Bob to Thanksgiving dinner. You know he’s going to spew some of his rightwing nutjob conspiracy theories and leave a bad taste in everyone’s mouth.

As sure as desserts are fattening, you know your bat-crap crazy relative will eventually blurt out some of the dumbass douchebaggery that bounces around in a noggins stuffed with effluvia from the Faux News channel. Or the Sludge Report. Or World Nut Daily. Or any of the hundreds of Conservative garbage heaps sliming the Internet and befouling the media.

Having a Conservative in your home is disturbing enough under any circumstances, but having one of them at the dinner table is absolutely disgusting. How can decent people enjoy their meal in the presence of conservatard buffoonery? How can anyone with an I.Q. above 80 tolerate the idiocy of a Rethuglican who is bloviating gibberish and gobbledygook?

Inviting a member of the Treason Party to dinner can lead to embarrassment in so many ways:

* You might have to endure GOP racism and xenophobia as a garnish to your slice of butterball turkey.

* You may have to put up with a dose of anti-vaccine fear-mongering accompanying your mashed potatoes.

* You might be faced with a hot dripping mess of GOP stupidity about lowing taxes on “job-creators” alongside your serving of candied yams.

* You’ll get prevarication about guns with the cranberry sauce.

* You’ll be served abortion nonsense with the green beans.

* Your plate will have a huge helping of homophobia with the pumpkin pie.

Why do otherwise normal families subject themselves to this embarrassment? Why do they invite human scum to sit at the dinner table and sound off about malarkey? Why do they permit Conservative filth and bile to ruin what should be a wonderful gathering?

“How can we not invite him?” still others say.

Really? It is so incredibly easy: Just don’t.

Look, when you discover that a member of your own family is a rightwing nutjob mental defective, the proper response takes just two simple steps:

(1) Point out firmly that the offensive creature is not yet a fully-formed human being.

You can do this, people! Grit your teeth, set your mind to it and remove the racists. Banish the bigots. Marginalize the misogynists. Trash the theocrats. Wipe out the war mongers. Cancel the Conservatives. In short, give your RWNJ relatives the boot.

Preserve peace around the dinner table this Thanksgiving: don’t invite the jerks who support bigotry, plutocracy, theocracy, and crypto-Fascist policies. Remember that there is only one way for a Conservative to be valuable to society: by being dead. Yes, I realize that it’s still against the law to put Conservatives out of our misery — but at least stop feeding them.