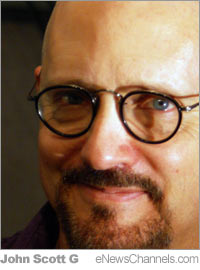 OPINION: People see the GOP as an out-of-touch, uncaring, heartless, backward, ignorant, and dangerous group of people who drape themselves in the flag as they pursue an ugly and vicious form of anti-Americanism. The GOP can’t figure out why.

At the podium for the latest in an unrelenting series of Republican Town Hall meetings is Jorge Lincoln Wellrock, a half-black, half-Hispanic, half-educated overpaid spokesman for the GOP. He is taking questions from the audience.

Q: What are you doing about the drilling and fracking in our county? It’s contaminating our town’s drinking water.

GOP: Progress and profits cannot be halted because of a few minor irritations. Hydraulic fracturing, or fracking, as it is often called, is a fine program from the good upstanding patriotic company formerly run by that fine upstanding patriot, Dick Cheney. It produces great results, with our great nation obtaining precious resources that are necessary for life in the twenty-first century. Now, if people want clean drinking water, then they need to take some responsibility for themselves and move to a city or township where the land does not contain valuable natural resources.

Q: But our water is a natural resource.

GOP: Not any more. Next question, please.

Q: Do you think our nation’s deficit spending would stop if the costs had to be borne by corporations that outsource American jobs and avoid taxes by banking offshore?

Q: Your party argues for removing regulations on industries that raise air pollution beyond levels that are safe for human beings of all ages. This is especially dangerous for the very young, the very old, and anyone with respiratory issues. Yet the GOP consistently argues for deregulation. Please explain that.

GOP: You simply cannot chain our fine American industries to the whipping post of sissy air quality regulations. The young, the old, and the infirm can be housed in designated safe areas of some kind. Perhaps these could be similar to, well, yes, much like an interment camp, to name just one example. These can be created with funds from private donations. The people are strong! The private enterprise system must be unshackled! Remember, my friends: you cannot bring profits to life just by breathing.

Q: But in the GOP’s world, you can bring death to life just by breathing.

GOP: Yes, and we Republicans smell the fear that comes from too many liberal policies of doom, death, and destruction of American industry! Let us all work to avoid that. Next?

Q: My mother and father each have several prescriptions that they must take in order to live. What assurances can you give us that there will be diligent oversight of the pharmaceutical industry in terms of quality and safety?

GOP: Regulation is stifling competition and the good, great, and strong American enterprise. Drugs can be tested at home. Haven’t you heard of in-home pregnancy tests? There is no need to burden our good, great, and fine American pharmaceutical firms –and their overseas plants and subsidiaries, and their legitimate overseas investments –with unnecessary, time-consuming, and extremely costly regulatory shenanigans. Why, American know-how and ingenuity have been on display in this very county for years in the creation of a great many home-grown and home-based businesses that produce pharmaceutical products of their own.

Q: Why are so many in the GOP against healthcare for all Americans?

GOP: We are in favor of people making their own arrangements for healthcare.

GOP: Precisely. Everyone should pull themselves up by their own bootstraps and obtain employment that comes with healthcare provisions. Thank you for helping me make that point. Next?

Q: The problem of income disparity has never been as acute as it currently exists in this country, yet the GOP is continually and consistently siding with those at the very top of the income ladder and at the expense — literally — of the middle class and the disadvantaged. How do you justify that?

GOP: Progress, my friends, progress! We are continually moving upward in terms of aggregate income levels of prosperity and advantage. A rising tide lifts all boats! We will trickle currency exchange downward from the top of the job-creation pyramid of profits!

GOP: Exactly. We all aspire to be as successful as those of us connected to Wall Street.

Q: And corporations that bank their profits overseas?

GOP: Our fine upstanding US-based corporations are doing nothing illegal when they shelter their hard-earned revenues from an odious and onerous tax-and-spend policy of the liberal left!

Q: But the GOP pursues a policy of tax-and-spend combined with a policy of spend-and-spend. And they do so without raising taxes.

GOP: Exactly! The GOP will not raise your taxes!

Q: But that means the GOP wars were not paid for.

GOP: Yes! Thank you for noticing. And you’re welcome, America! Elect more Republicans so that the insanity of using taxes to pay for things is ended now and forevermore, amen.

Q: Would the healthcare cost problems in this country be solved sooner if members of Congress had to give up their cushy health coverage and endure what’s available to the poorest residents of their districts?

GOP: Well, now there are always going to be pie in the clouds ideas that are on the far side of the moon and we cannot allow ourselves to be distracted from the very real business of America. Thank you. Next?

Q: Members of Congress have their kids in private schools. Shouldn’t they be required to be in public schools?

GOP: People have unusual ideas sometimes about what is available to the people. Public schools are open to the public and private schools are also open to the public. Same difference, same sameness. Everyone is free to pay for quality education. Thank you for your well-phrased and eloquent and literate and non-loquacious question. Next!

Q: When will it be a requirement that the sons and daughters of Congressmen serve in the military?

GOP: There is no need for conscription in our fine and volunteer-based military and I, for one, will not permit any words to be spoken against our fine patriotic heroes in our fine and upstanding military! Next.

Q: Why did the GOP vote against the jobs bill?

Q: Just not as long as the GOP votes on it?

GOP: It is a question of balance, my friends. Balance and budgets. And we in the GOP will not rest until all the budgets are in balance. That’s the right way. That’s the American way!

Q: Why did the GOP vote against the veterans’ jobs bill?

GOP: That was blown out of proportion.

Q: Why did the GOP vote against the disability act?

GOP: Ah, a question that leads to good, solid logic. That was a treaty. Treaties involve foreign countries. Foreign countries are in the United Nations. The United Nations has squadrons of black helicopters that can come out of the sky and attack loyal upstanding Americans who have genuine birth certificates. We must not allow our citizens to be attacked by foreigners operating within our own shores! Next.

Q: Why did the GOP vote against students and the student loan programs?

GOP: Students must display more responsibility in repaying their loans from the past. Until that happens we shouldn’t throw good money down the drain after bad money that was thrown hither and yon! Thank you for your question. Next?

Q: Why does the GOP want to hurt seniors by harming Social Security and Medicare?

GOP: The financial projections and actuarial tables show an alarming picture for future fiscal policy-making that must be addressed here and now to preserve all entitlement programs to assure a better future for our current population which will be our seniors of the future.

Q: Why does the GOP call Social Security and Medicare “entitlements” when these are funds that seniors have earned and paid into over their entire lifetimes?

GOP: The use of the term “entitlements” is bipartisan. Next?

Q: Why does the GOP hate immigrants?

GOP: No, no, no. Now, my friends, we in the GOP love immigrants. They are a fine upstanding part of America and our crops couldn’t be harvested and our lawns couldn’t be trimmed without them. We must respect them and honor them.

Q: And pay them low hourly wages while trying to deport them?

GOP: Well, that’s not precisely accurate, although it does capture the spirit of the thing. Next?

Q: Why does the GOP hate women?

GOP: Only the closeted homosexuals in the GOP hate women.

GOP: That is correct. Now, my friends, I see that we are almost running out of time for our meeting and so let me say a few words of conclusion. My friends, through my veins runs a deep and everlasting love! A love of the United States of America, a love of the Holy Bible, and a love for the guns that enable us to defend them, even against people who are not attacking them! I love women, with their dedication to the cooking and cleaning and raising the children. I love our immigrants, the legal ones, the taxpaying ones, the ones that behave themselves. I love voters, just as long as they can find several ways to prove they are voters. I love the sweet baby Jesus, and I resent and even hate it whenever anyone points out his teachings are similar to the evil Democrats. But I am filled, my friends, with love. I love everybody. Why, I even love the nigg-, um, the dark-, um, the peoples of color, and I can assure you that I will always strive to keep them in my sights! Lately, I am under attack. Yes, yes, it’s true. But notice that I am also on the attack back! With legislation, with a sustained process of counter-clarification, and with the great American principle of prevarication. That, coupled with the lack of voter turnout and a general run of apathy and ignorance among the general population, means that I know we shall prevail! Gentlemen, I am proud to say, and I hope you will join me in speaking this with head held high: I am today’s Republican.

Q: What about all the obstruction from the GOP?

Q: Whenever there was needed legislation–

GOP: Obstruction is not the GOP way.

Q: But when President Obama would propose something necessary–

Q: But the obstructionist approach of the GOP is always–

GOP: This discussion is obviously going in circles my friend. Let’s move on.

Q: But the GOP obstruction in the House and Senate is unpatriotic and must be stopped by–

Q: Do you believe in the policy of separation of church and state?

GOP: That is a fine principle. In principle. In practice, however, I will not stand idly by while we continually remove God from our classrooms, our sporting events, our nativity displays, and our churches!

This satirical article is Copr. © 2013 by John Scott G., and originally published on eNewsChannels.com – all commercial and reprint rights reserved. Read more by JSG at: https://enewschannels.com/author/scott-g-the-g-man/ .