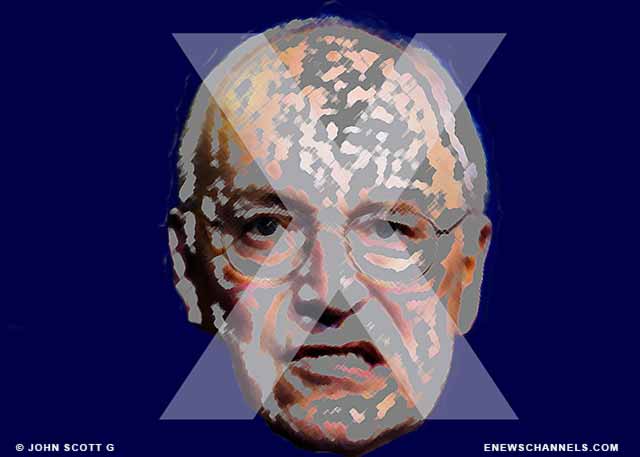 Note: Hold off on the party planning: as of this writing, Dick Cheney is unfortunately still alive. As a public service, we offer this pre-eulogy.

Let us all give thanks for the passing of unindicted war criminal Richard “Dick” Cheney. Remember: no tears need to be shed when something so vile ceases to exist, so let’s all celebrate his departure from this mortal dimension.

The official birthdate for Richard Bruce Cheney is usually listed as January 30, 1941 but his malignant soul dates back to the Dark Ages. At several points during the twentieth and twenty-first centuries, his rotting carcass was cut open for heart operations, and doctors were always amazed to find coiled serpents, nests of spiders, and eggs of lizards mixed in with otherwise normal human organs.

The physicians were sworn to secrecy and threatened with death and malpractice suits if they revealed their findings. “Remember what happened to Harry Whittington,” said one of Cheney’s henchmen, referencing the 2006 incident in which Cheney fired a shotgun blast into the man’s face, neck, and chest.

Early years and adolescence of Cheney’s sordid life were spent memorizing the collected works of Niccolo Machiavelli and then it was on to college, which he attended in order to obtain five draft deferments and thus avoid military service during the Vietnam War. While perfectly understandable at the time, it became somewhat problematic a generation later when he vociferously backed unprovoked and unjustified military excursions in the Middle East.

As long as it was other people who had to fight, he was in favor of battle. Cheney is one of those for whom the terms “war wimp” and “chicken-hawk” were invented.

Finding a woman who was morally bereft and without self-esteem, Cheney married her in a ceremony of Darklight Arts, after which the disgusting duo raised two daughters who both became rightwing nutjob douchebags similar to their parents.

A Career in Treachery

Cheney’s record of attacking the basic values of humanity is long and deplorable. Included on his blood-soaked resume are stints toiling for some of the most reviled political figures in American history. Cheney worked for Richard “I am not a crook” Nixon and his befuddled successor, Gerald “played too much football without a helmet” Ford. Cheney seemed to plummet to the bottom of the heap by serving in the administration of George “idiot shrub the first” Bush. This was heinous but worse was yet to come.

When the nation needed to climb out of the economic hellhole that had been created by Ronald “early onset Alzheimer’s” Reagan and Shrub I, Cheney could no longer coast on the public teat so he worked for a while at one of the many neo-Fascist fake research organizations, the American Enterprise Institute. That was before finding a better way to financially rape the country by becoming CEO of Halliburton, one of the biggest war profiteer firms.

Next, Cheney sank to even greater depths of depravity by serving as vice president to George “idiot shrub the second” Bush. It was in this role where he was one of the architects of a plan to get 4,000+ Americans killed so that defense contractors — including the malevolent Haliburton — could rake in billions of taxpayer dollars during his administration’s idiotic war efforts that have destabilized the Middle East.

Many writers have pointed out that everyone in the Bush/Cheney administration committed treason by leading the USA into an unprovoked and unnecessary war in Iraq. Additionally, Bush, Cheney, Defense Secretary Donald Rumsfeld, and CIA Director George Tenet have been accused of war crimes and crimes against humanity for authorizing torture.

One other act of treason seems to belong to Cheney more than the others — he was the prime mover behind publically revealing the identity of one of the CIA’s covert agents, Valerie Plame. It was a Cheney toady, I. Lewis “Scooter” Libby, who took the fall for it but the investigation and prosecution should have gone much higher up the White House org chart.

The Dick is survived by his whore, Lynne, and two dystopian daughters, each with the moral precepts of earwax and the intellectual acumen of bull semen.

“Your Dick is Out” segment of The Daily Show:
http://thedailyshow.cc.com/videos/f3gjhk/excuse-me-your-dick-is-out