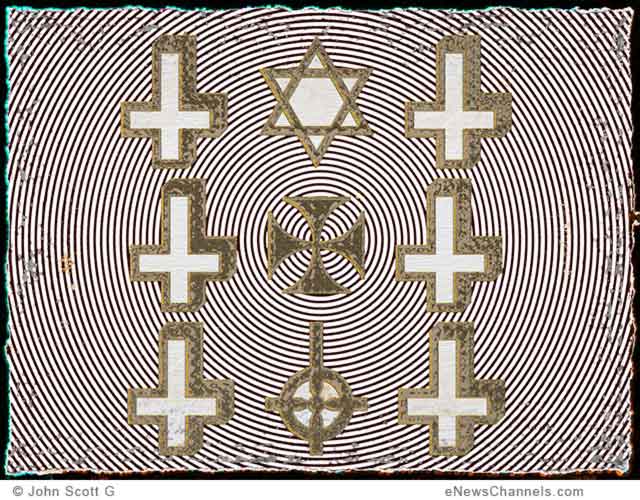 Religiosity is an odious mistake of candidates from both major political parties but is especially prevalent among members of the rightwing nutjob cabal. But the religious behave in the same manner as radical extremists by claiming extra-special rights for “sincerely-held beliefs.” If they want to play by those rules, let’s look at my sincerely-held beliefs.

The whining, moaning, wailing, and complaining of the religiosity brigade can be deafening. Among their demands are deferential treatment, special dispensations, and a “get out of jail free” card whenever they decide to break the law.

In the Name of Religious Freedom

Many of the people who denigrate the extremism and brutality of the Islamic State have turned out to be rightwing nutjobs who suggest killing Muslims if they do not “accept Jesus Christ” as lord and savior. That is not only deplorable, it is downright embarrassing. Not to mention being insulting to anyone with an I.Q. above 85.

For all their false piety, the religious right behaves in a similar manner to the Islamic extremists they profess to abhor. They regularly flout the law by denying the rights of those who do not share their views. They justify a whole range of egregious acts because of their “sincerely-held beliefs.”

All right, if you want to play that way, allow me to present:

– All conservatives are racist assholes who deserve to be horsewhipped in the public square under the light of an unrelenting sun. Say hallelujah!

– All conservatives are homophobes who deserve to be raped by cattle prods in the early evening when the pale blue sky slides into lazy dusk. Praise Jebus!

– All conservatives are plutocrats who deserve to be gutted, stuffed with pennies, and used as anchors for cruise ships. Say it to pray it!

– All conservatives are misogynists who deserve to be drowned in a bucket of menstrual blood by the light of the moon. Dog is God spelled backwards!

My Religion Frees Me

I can hear you saying that my views are extreme. But I counter with the same arguments used by inbred and cretinoid Christian “leaders” in the USA who say that you have to accept their warped views or you are intolerant.

But wait, I hear you say again. They must be sincerely-held religious beliefs. Religious. That’s the ticket. Really? So it’s your embrace of an invisible friend who lives in a land of fluffy clouds and harp players that enables you to hold your reprehensible viewpoints? All righty then…

Allow me to announce the formation of a new religion. Let’s start with a name. We could be the Flock Unduly Celebrating Kale. Or we could be the Dominion Of Lying Troglodytes. Or perhaps the name should be the Sect Honoring Indigenous Thoughtlessness. Or we might gather under the banner of Proselytizing Idiotic Satanist Santorumism. Or the Denomination of Actively Morbid Nincompoops.

Oh, hold on, I’ve got it: we’ll become the Congregation of Unified Negativity Triumphant. Now, in order to have our acronym accepted by all emags and ezines, we will augment the spelling to CoUNT. (Be sure to check back for the unveiling of our logo — the current sketch consists of upside-down crosses flanking a field of genetically modified corn and condom-filled skies with our actual acronym spelled out in blazing coals.)

Get Down for the CoUNT

CoUNT was conceived as an offshoot of the somewhat controversial Church of the Gooey Death & Discount House of Worship while welcoming and incorporating members of Our Lady of Perpetual Agony and the occasional Baptist.

* We pursue strict adherence to logic, thus making us anathema to Republicans. But similar to the GOP clown car brigade, we absolutely believe in the right to trample on the rights of people who do not pay obeisance to our existence.

* We are pro-emancipation and anti-slavery.

* We are pro-multicultural interaction and anti-segregation — and this applies to schools, churches, and all public institutions.

* We are pro-lifestyle and anti-discrimination — and this applies to interracial marriages and same-sex marriages.

* We are pro-humanity and anti-corporations, or at least unregulated corporations. Therefore, we are in favor of clean water, breathable air, and unmodified food. We are against fracking, drilling, and pipelines across private land. We do not want oil refining or chemical storage or runoff or containment pools, period. It’s not just that we don’t want them anywhere near homes or the water table; we don’t want them anywhere.

* We are pro-science and anti-denial of reality — which means we support stem-cell research and the teaching of science (including such undisputed theories as gravity and evolution). We also support assisted dying as well as the active change from fossil fuels to renewable energy.

And here’s an important one that a lot of knuckle-draggers just cannot or will not understand:

* We are pro-life and pro-choice. Yes, that is correct, morons: by being pro-choice we are supporting the lives of women while insuring that no unwanted child will be forced into the kind of cold and uncaring world you dimwits inhabit.

Further, it is our belief that a woman has the right to choose contraception, family planning, and abortion in private without any jerkoffs gathering around her to point, shout, wave placards, or any of the scurrilous activities that conservatards do to attempt to dissuade or impede the family planning process. (For those who don’t know about it, anti-choice assholes try to raise the blood pressure of women entering clinics to make it impossible for them to have a procedure at their appointment time.)

We have no sleep-inducing screeds for you to read. None of that boring Aphrajape begat Shilohj and Shilohj begat Mirqirq and so on and whatnot. No book. No pamphlets. No lists of rules and regulations and funny hats to wear on certain occasions. If you would appreciate some guidance for your life, just watch “The Daily Show” or “Last Week Tonight” and you’ll be on your way to getting it.

We have no closed-to-outsiders social networks. You are encouraged to interact with as many different types of human beings as you can stand. Tell ’em about the CoUNT or don’t; it’s totally up to you. No points for spreading the word and no demerits for shutting the hell up about it.

I Think, Therefore I am Not a Republican

In most religions, the ideas of the individual are a no-no. At CoUNT, we don’t tell you what you must believe. Instead, we insist on humanistic reactions to the world at large. While other religions want to turn their members into automatons — or sheep to be shorn of money and morality — we emphasize the intellect.

What? Oh, sorry. I forgot that sometimes Republicans attempt to read this column. The word I used in that prior paragraph was “intellect.” INTELLECT! As in “intelligence.” Oh crap, how can I put this? Oh, try this: “smarts.” Or, as some of your teachers tried to advise you: Use your head and think for a change!