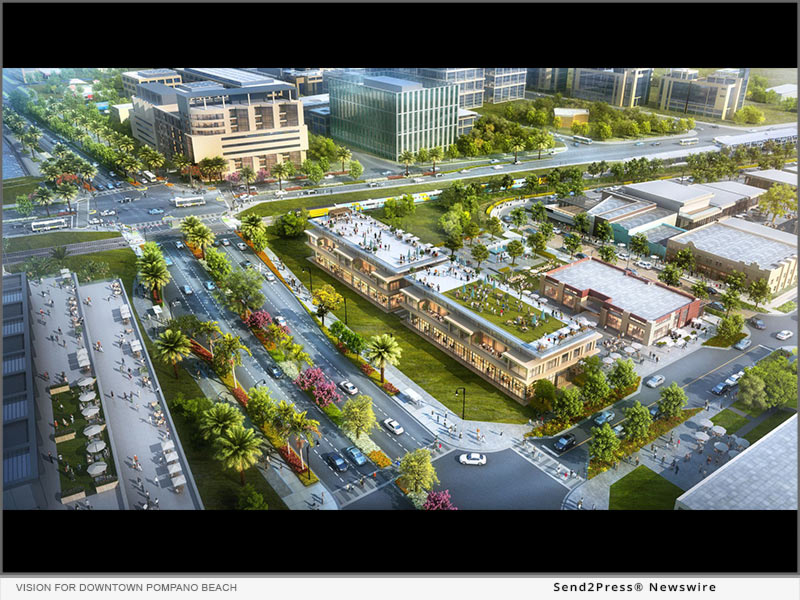 (POMPANO BEACH, Fla.) — NEWS: The City of Pompano Beach (City) and the Pompano Beach Community Redevelopment Agency (CRA) have issued an Invitation to Negotiate (ITN) for a Master Developer to help the City and CRA create a new Downtown and realize the vision of an exciting destination for businesses, residents, tourists, and other investment stakeholders.

In preparation for this ITN, the CRA hired globally acclaimed real estate firm CBRE as the exclusive agent to broadly market the opportunity and analyze responses for a Master Real Estate Developer for the +/-75.38-acres of publicly-owned land assemblages along the I-95 corridor. The City and CRA hope to secure a development partner by September 2022 and begin implementation of the new Downtown in 2023.

“Pompano Beach has become a red-hot real estate market for quality developers looking for sites for new projects. The investment the City and CRA has made in the public realm is attracting good growth partners and shining a light on this gem of a city in South Florida,” said Nguyen Tran, CRA Director.

Located in Broward County between Palm Beach and Miami Dade Counties, Pompano Beach is looking to capture the influx of new development interest flocking to the State of Florida. With land assemblies ranging in size from +/- .2 – 8.35 acres, the large amount of acreage is a unique opportunity to build on the foundation the City and CRA have laid for development of the new Downtown. A commuter rail stop is planned in the middle of the Downtown area and will connect the four intersections of Downtown where redevelopment is already occurring. Two new luxury apartment projects, restaurants and cultural buildings were all drawn to the area based on aggressive public investment by the City and its CRA. The public investments included a new $50 million beachfront, garage and pier, a $180 million bond for citywide public improvements, land use and zoning upgrades, infrastructure and streetscape improvements, and entitlements and availability of land for residential, hotel and commercial development.

“In Pompano Beach, we have a historic opportunity to create a thriving downtown from the ground up,” said Nguyen Tran, CRA Director. “There are very few cities nationwide with the ability to develop a new vision and trajectory for their city. With this project, Pompano Beach will be creating an economic driver for decades to come, one that will brand our city as a hub for technology, arts & culture, shopping, and nightlife.”

Downtown Pompano Beach includes four quadrants: The Old Town District, also known as Old Pompano; The Civic Commons District, which includes City Hall, the library, and Cultural Center; the Innovation District, with MLK Boulevard as the “main street” between Dixie Highway and I-95; and a residential area.

About the Pompano Beach CRA:

The CRA was created in 1989. It has two independent districts: Northwest CRA and East CRA established by City government for the purpose of carrying out redevelopment activities that include reducing or eliminating blight, improving the economic health of an area, and encouraging public and private investments in a CRA district.

The CRA is funded through Tax Increment Financing (TIF). The funds are collected as property values increase and a portion of that increase is captured by the Agency. TIF raises revenue for redevelopment efforts without raising taxes. For more information https://www.pompanobeachfl.gov/government/cra