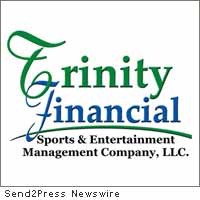 “The purpose of Trinity Financial Advisory Board is to provide guidance to our firm’s unique niche clientele,” says Grandich. “Through their own life experiences, Christian advisory board members help guide athletes and entertainers through many of the challenges that celebrity often brings.”

Nicholas Fotiu was the first Staten Islander to play for the New York Rangers. He was a favorite among fans for his fighting style and his penchant for throwing pucks to the inexpensive “blue seats” of Madison Square Garden.

He also played for the Hartford Whalers, Calgary Flames, Philadelphia Flyers and Edmonton Oilers before retiring. He played 646 NHL games between 1976 and 1988, and is listed among the all-time greatest New York Rangers in the book 100 Ranger Greats.

“Like many who sat up in the blue seats at Madison Square Garden, no NY Ranger ever made you more proud when he stepped on the ice than Nicky Fotiu,” says Grandich.”While I was never fortunate enough to be on the receiving end of the pucks Nicky threw to the fans, I now have the honor of having have one of the most humble professional athletes join our advisory board.”

Gregory “Bo” Kimble, 43, is as well known for his college basketball career as he is for his pro career. A native of Philadelphia, Kimble played at Dobbins Technical High School where he and teammate/best friend Hank Gathers led the team to the league championship in 1985. The pair went on to play college basketball where they were an integral part of a historic Loyola Marymount offense that still owns the five highest single game scoring totals in NCAA history. After the tragic passing of Gathers in the 1990 WCC Tournament, Kimble led the Lions to one of the most memorable post-season runs in NCAA Tournament history. The run was best symbolized by the right-handed Kimble shooting his first free throw in each NCAA Tournament game left-handed in memory of Gathers. As a result, Los Angeles County declared July 17, 1990, “Bo Kimble Day.”

In the 1990 NBA draft, the 6’5″ guard was picked by the LA Clippers. He played with the Clippers until 1992, when he was traded to the NY Knicks where he played one more season.

Since leaving basketball, Kimble devotes his time to the nonprofit organization Forty-Four for Life, which aims to decrease the rate of death and disability from life-threatening heart disease.

“When I think of class, honor and humbleness in sports, no single event in my opinion surpasses what Bo Kimble did in honoring his friend Hank Gathers,” says Grandich.

Trinity Financial Sports & Entertainment Management Company offers a variety of services for individuals and small to mid-sized businesses. With the assistance of former New York Giants running back and two-time Super Bowl Champion Lee Rouson, co-founder and company consultant, Trinity Financial offers specialized services for professional athletes and entertainers. Grandich is also a member of the National Association of Christian Financial Consultants. The company is located at 2431 Atlantic Avenue, Manasquan, NJ. For information about Trinity Financial, go to www.TrinityFSEM.com .