Thanks to Mother Earth’s gracious Snow miracle at Vermont’s Stowe Mt, we were able to help rebirth SKI BALLET into a more fun, easy, romantic form for all ages and levels, on April 8,during U.S. Ski Hall of Fame Week (HOF). My FREE clinic was at the urging of ski Elders like John Fry and seven pages on Google. But when we arrived it was foggy and raining and that was the week’s forecast. So our Native American Olympic Team foundation organized 4 snow ceremonies that transformed it into 6 inches of Epic powder. 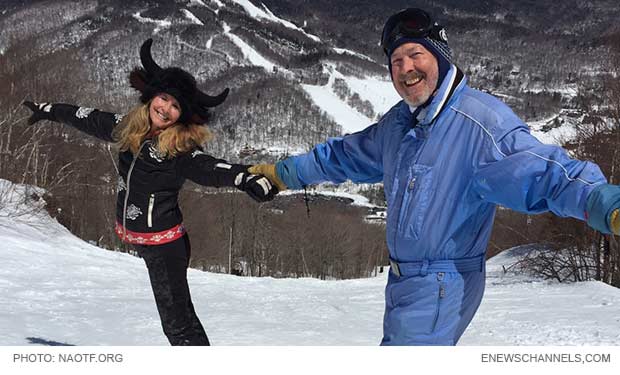 What is SKI BALLET? Here is a taste since many weren’t born in its 1970-90s heyday with its World Cup, Olympic Demonstrations, as well as an International Skidancing Association and Championships for about 100 pairs skiers who were young at heart. As a child ballerina from Rutland and a yogaphile, these are some of the contributions I made to pioneering ski ballet that Baryshnikov called “fun, imaginative, with lovely lines.” Suzy “Chaptick” Chaffee goes Gangnam style on skis.wmv – YouTube:

Thanks to this shift in Stowe’s weather, participants like Vail’s Stan Rumbough said: “Skidancing is as much fun as heli skiing in the Himalayas.” And certainly cheaper! He also loved the oohs and aahs of onlookers of his spinning, grinning and waltzing down Spruce Peak, along with the others, even on their longer shaped skis.

Stowe’s weather phenomena, including a rare SNOWBOW, was thanks to our support team: Justin Koski’s HOF, and ceremonies with our foundation’s gifted Natives, including Cherokees Olivia Ellis PhD and ski fashion pioneer Barbara Alley. When Stowe Mt execs Jeff Wise and Shawn Owen showed me the rain forecast I organized a spontaneous prayer circle where they also gave gratitude to Mother Earth for the Stowe’s amazing snow this season plus the Nature spirits who direct the clouds and winds, and ancestral spirits. They smiled on us especially after my fellow Vermonter, Olympic icon Billy Kidd (Abenaki) announced at his Octagon talk on top that the Stowe Mt Club is starting an Abenaki Ski Program like his “Steamboat Ute Future Olympians ski and snowboard program” that is helping heal Colorado’s past and start a joyful new beginning.

HEALING THE HEARTS OF U.S. WOMEN

The Native Elders say that in healing each others’ hearts, we heal and release the negativity that Mother Earth absorbs, which creates this ideal weather, instead of being released through droughts, frankenstorms… That is why this miracle was also thanks to the Stowe execs joining 25 US and Canadian ski leaders in wanting to help more women afford to ski again, like Bob Orbacz former COO of the Snowsports Industries of America and Bjorn Dahl, former director of Western Forestry and Kirkwood Ski Area.

These leaders love the fairness of ski areas giving 23% FEM discounts on lift tickets since U.S. women make 77 cents for equal work, $11,000 less a year. This could also double profits of ski areas since moms decide where families go on vacation. Plus they endorsed escalating TAX CUTS for companies giving equal pay, childcare and leave for dads too, $10 minimum wage, and renewable energy (suggested on Fox News), which we gave Ivanka Trump, whom I met skiing with her dad at Telluride.

Imagine how many millions more women/families could afford to ski again to also spread ski ballet, given there are 14 million skiers today. And equal paid single moms can also prevent 17 million children from going to bed or school hungry from our being 28th in equal pay!

Since Stowe’s HOF inductee Michael Barry, President of the National Ski Areas Association, saw how “giving equal pay and ops like this could heroically also help trigger a $4.3 trillion U.S. economic boost,” according to the McKinsey Global Institute study in Time Mag and CNN, his response there to our plan was, “All your ideas are great.”

Thanks to PugSki.com founders Phil and Tricia Pugliese videoing the basic lesson and then learning, you can see it on the PugSki and NAOTF.org sites next December.

HELP OUR KIDS HAPPILY THRIVE AND SKI INTO THE NEXT CENTURY

Stowe’s miracle is a Wakeup call and winning formula on this Earth Day/U.N.’s 9th International Mother Earth Day. It will be included in our “Snowdance Phenomena” documentary of the 55 years of these gifts from heaven, which an HBO producer and 50 countries are interested in airing.

After the U.N. officially recognized Mother Earth in 2009 as a living advanced being and we are all related, these snowdances are critical to healing HER HUGE heart, through giving Her love and appreciation, like all our ancestors once did for all HER gifts.

The consensus of the U.N.’s 192 countries on their 4th Day in 2012, was that the “key to regenerating Mother Earth is a combination of green technology and the ancient wisdom of the tribes, especially the snowdances.”

For this ski ballet rebirth and snowsports to go on, we need to take a science-reality check: The World Wild Life Fund and Stanford say “2/3 of our marine and animal life may be gone by 2020, unless we mobilize.” And they are key to our survival.

Therefore, please forward this to your ski areas and urge them to spread these tribal programs and snowdances that Vail’s COO told the Wall Street Journal covering their Ute snowdance that ended their 2012 catastrophic drought, that each miracle is worth a million dollars to their resort. The womens’ discounts and ski ballet revival can also help this healing joy ripple around the world.

Given the warmest temperatures in history, by finally giving back to our tribes, we can enhance ongoing snowmelt critical for drinking water and AG and preventing wildfires – the highest in the world – which Harvard said is a major contributor to global warming. Together we can get the temperature down to 1.5C, so our children can ski into the next century. Michael Berry asked our foundation to create SNOW-RIDERS.ORG to make it easier for ski areas to reach out to their tribes.

Please contact us to give us a hand or get help on any of this, via NAOTF.org, a Colorado nonprofit 501C3 that has spread healing joy to 10,000 tribal youth in the U.S. and Canada over 20 years, but just when this tribal wisdom is needed MOST, the Native ski and snowboard programs we facilitated are drying up in the U.S. Yet the U.S. spends over $150 billion a year on green technology and this tribal wisdom costs almost nothing. So the ski areas or other Earth Heroes could easily turn the tide!

See more ski ballets, like my first sensual skidance with Canadian World Champ John Eaves at Vail in Willy Bogner’s “Fire and Ice,” which won a Jerry Award for being the No 1 ski box office hit worldwide on https://www.youtube.com/watch?v=lXJDrUGzacg. (ski ballet starts at 1:36) Plus Jan Bucher’s stunning glacier ballet with John on NAOTF.org.

The site also has stories on Puerto Vallarta’s only solution that regrows coral as the ocean warm, as well as the plankton, which “coverts CO2 to Oxygen more than all the rainforests and plants on Earth.” (National Geographic). And watch for our evolutionary plan so this generation could skidance into the Olympics where artistry on ice is the biggest draw then freestyle aerials.

Dr Ellis said, “This Mission serves both Terra and terrestrials better than anything else cooking on the stove.” So please spread these solutions from heaven to bring in a beautiful New Dawn on our beloved Mother Earth. SNO KIDDING!

Article is Copr. © 2017 by Suzy Chaffee and first published on eNewsChannels&trade (eNewsChannels.com) – a publication of and © NEOTROPE® – all commercial and reprint rights reserved. Opinions are those of the author and may not reflect the opinion or policy of this site or its publisher. This original opinion content has not been revised, re-edited, or otherwise “corrected,” in order to retain the author’s unique voice. For questions about this article, contact: Suzy Chaffee, at NAOTF.org – Suzynativevoices@aol.com