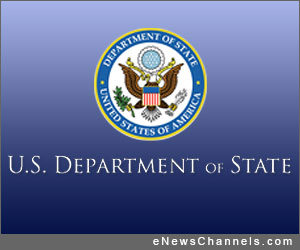 WASHINGTON, D.C. /eNewsChannels/ — Following is the text of a joint statement issued by the United States of America and the United Arab Emirates (UAE) at the conclusion of the U.S.–UAE Economic Policy Dialogue (EPD), on March 27 in Abu Dhabi.

The meeting reflected the achievements that have been made since the first dialogue last year, such as the hosting of the third Annual Global Entrepreneurial Summit on December 2012 in Dubai and the new visa system provided by the United States for UAE business people visiting the United States.

The discussions focused on topics including exploring ways to ease business facilitation, formalizing mechanisms for linking U.S. businesses with UAE training and internship organizations, addressing regional political risk perceptions related to e-commerce, and looking into opportunities for collaboration in energy, cyber security, and the involvement of the private sector.

The event was also a platform to announce the creation of a U.S.–UAE CEO Roundtable that will advise successive EPD meetings starting later this year and the publication of a new study on the economic impact of the new commercial air routes between the two countries.

The UAE is the largest export market for U.S. goods in the Middle East and Arab World. Total trade between both countries reached 24 billion dollars in 2012. Today’s meeting underscores the strong UAE–U.S. relationship and provided opportunities to discuss ways to further deepen our economic cooperation, which will lead to more economic growth and job creation in both countries.

The next Economic Policy Dialogue will be held in Washington, D.C. in the latter half of 2013 and is expected to include discussions on new strategic initiatives and priority sectors.