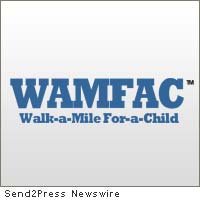 ELIZABETH, N.J. /eNewsChannels/ — WAMFAC, a Jericho Road Ministries project, announced that Rutgers University-Newark, Office of Campus and Community Relations (OCCR), has joined the ranks of its impressive partners. Jericho Road Ministries and a diverse group of religious, nonprofit organizations, schools and municipalities throughout the state of New Jersey, are coordinating a multi-city, one-mile walk on Saturday, September 18, 2010.

The walks will begin simultaneously in each of the participating cities and will culminate with the distribution of food and other supplies provided by Feed the Children, one of the world’s largest nonprofit relief organizations dedicated to helping hungry and hurting people, at designated sites.

The program’s main initiative is to raise awareness about families with children who are living under the poverty level, while providing some relief to neighbors.

“There are more than two million children living in New Jersey; 222,090 are living below the poverty level,” explains Yetta Armstrong, founder, Jericho Road Ministries. “Through this event, we hope to reach thousands of families in need – approximately 400 families in each of the participating cities.”

The fee to walk is $30 per person which covers fees for transporting food, hygiene products and other related costs. All residual money raised will be divided equally among the participating partners for one of their youth programs.

Although the views and opinions of some of the WAMFAC partners do not necessarily express the views, opinions, and religious beliefs of all the entities and groups involved in this New Jersey project initiative, the WAMFAC partners have elected to put aside their political and religious differences for the sake of edifying their communities in a holistic and healthy way.

For more information or to register online, visit: .

Pure Transplant Solutions Announces Collaboration with the University of Alabama at Birmingham Mar 11, 2021