BERKELEY, Calif. — If the planet is becoming a “global village,” how do you obtain a condensed view of what fellow villagers are thinking, doing, and creating right now? Answering that question is the goal of the World Mind Network, a group and website (worldmindnetwork.net) which employs the metaphor of the human race as one giant brain to explore new ways in which, largely through Web 3.0 technologies, we can connect with others, learn about distant and exotic people and phenomena, and address major problems in new ways. First the site relates what the top blogs, searches, books, news stories, music, websites, and videos in the world are according to the proper authorities. 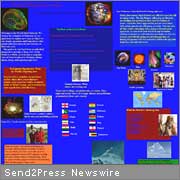 Then it gives visitors a virtual time machine ride from pre-history up to the Middle Ages and beyond.

Many things which occurred in the distant past are still occurring now, and if they are viewable or hearable over the Net, one can enjoy an experience very much like travelling forward in time. Thus, the site has links to an audio feed of the background microwave radiation generated by the Big Bang, live pictures of the sun, webcams showing gorillas, pandas, and bees, and even live video of archaic human lifestyles like monks praying in a monastery.

The site is used in schools in Japan, Macedonia, Kenya, Bhutan, Bolivia, and Holland.

The site has other features which embody its theme of the Internet as “World Brain”: a section called “Wisdom of the Elders” which links to short videos of living and dead sages from Carl Jung to Nellie Red Owl; a listing of prestigious online scientific experiments which welcome participation by anyone with a PC, and a group of blogs and forums from Third World countries not normally encountered in the higher ranks of the blogosphere. There is an index of Fair Trade artisans from Asia, Africa, and Latin America, and a section on Collaborative Mind Mapping, which seeks to intricately apply the knowledge of many linked brains to long-standing problems like climate change and poverty, forming – in essence – a human supercomputer.

The World Mind Network recently completed a project with the Sambaza Group and Friends Beyond Borders in East Africa, which allows cell phone users with unused minutes to donate them to a Multimedia ICT education center in Kenya, which can use them as a kind of legal tender (www.africahelpguide.com/article.cfm/id/319009).

Next in the works is the “Rare Languages Institute.” For all its wonders, the Internet has a certain homogenizing effect on human culture, and one aspect of this is the tendency to standardize English as a lingua franca. The WMN is setting up a series of blogs and social networks on which members can ONLY communicate in Ewa, Manx, Shoshoni, Maltese, West Javanese, and other fascinating but threatened languages.

The founders welcome new proposals which relate to the main theme: How can Web communications address major world problems with something like the efficiency of a biological brain?

How to Achieve 'Blue Mind' in Belize

Dr.Fone gives peace of mind when updating to iOS 11 with their zero-day support, even for the iPhone 8