AUSTIN, Texas — My Black Networks, LLC announced this past week a new portal site — The MyBlack(TM) Urban Vertical — with a core mission to address the fragmented state of data that is culturally relevant to its target markets. My Black Networks (MBN) defines itself as an ecosystem of informational web sites targeting unique segments of the African, African-American and Caribbean communities or the African Diaspora. MBN seeks to fill a service gap while expanding networks and empowering communities. Currently, social media and networks that target blacks tend to focus primarily on casual topics such as entertainment, dating, celebrity news and gossip. 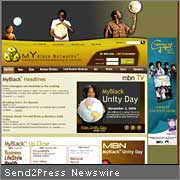 And, while MBN recognizes this market is satisfying a consumer demand, they have chosen to respond to other niche markets that are somewhat ignored by mainstream media and are seeking online resources consistent with more serious pursuits such as: business, finance and health.

The first phase of the launch includes unique web sites for 20 cities with large African-American populations. Each site includes the MyBlack(TM) brand and offers relevant national and local news; a black-owned business directory; small business resource center; a wealth-building section; an events section; and special interest areas for lifestyle, health and romance. Each city’s site is accessible from the portal and is also connected to a shared social networking platform.

Eventually, MBN plans to expand to include over 200 major cities around the globe from within the U.S., Africa, Brazil, Canada, the Caribbean, and Europe.

MBN’s primary objective is to facilitate targeted vertical search by employing vertical branding of relevant content. In the future, they hope to partner with a vertical search engine or to create their own.

When asked what MBN intends to do after reorganizing the Web, Elbert McQuiller, co-founder, shrugs and replies, “Watch the tail wag the dog.”

“Long tail” is a reference to a phrase coined by writer Chris Anderson in his October 2004 article in Wired Magazine. The hotly-debated premise of Anderson’s article is that the Internet has lowered the cost of distribution to the point that it now makes sense for merchants to address the demand of niche groups for more tailored goods and services.

'I Forgot to Love Her' is a New urban romance novel by author Kenesha Collins Jan 15, 2021