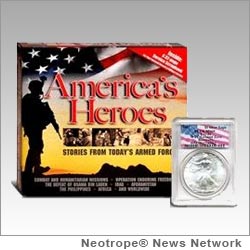 AUSTIN, Texas /eNewsChannels/ — The United States Gold Bureau announced today the general availability of Silver Eagle Coins recovered from several bank vaults below the World Trade Center. These coins were removed from the rubble following the September 11 terrorist attacks in 2001.

“This is an amazing opportunity for any coin collector or precious metals investor to own a piece of American History,” said John Hutmacher, President of U.S. Gold Bureau. “They are extremely affordable and can be a great investment. Rarely do we have coins with so much historical and emotional symbolism.”

The coins have all been certified as authentic and are now available to the general public and private investors alike. Offered at $319, every coin purchased will come with a copy of “America’s Heroes: Stories from Today’s Armed Forces” and a portion of proceeds will be donated to the WTC National Memorial and Museum. Interested collectors can purchase through the U.S. Gold Bureau’s public store at www.usgoldbureau.com/store or by calling (512) 623-7797.

About The United States Gold Bureau:

The United States Gold Bureau(R) is the leading authority of all things related to precious metals and buying gold. The United States Gold Bureau is a private distributor of gold, silver and platinum coins from the U.S. Mint and is not affiliated with the U.S. Government. The firm is ready to assist clients with all of their gold investing and coin collecting needs. When speaking to a U.S. Gold Bureau representative, customers should expect to be treated fairly and to receive the most accurate information available. Learn more at: http://www.usgoldbureau.com/ .