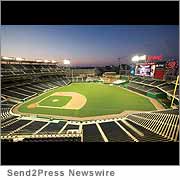 The 41,888-seat stadium is the new home park for the Major League baseball team, the Washington Nationals (www.nationals.mlb.com) and the centerpiece of D.C.’s massive, new Ballpark District-a billion dollar, multi-use riverfront development little more than a mile away from the U.S. Capitol. The ballpark opened officially March 30 with the home team winning the season opener 3-2 against the Atlanta Braves.

Financing for the $611 million plus project was approved in December 2004. Steel erection on the stadium began in October 2006. The skeletal design and construction was divided into nine stages, a procedure that allowed the production and installation of one section of steel framework while engineers designed the next. The last crane pulled away on June 30, 2007. At 23 months, Nationals holds the record for the shortest duration build ever attempted for a major league baseball stadium.

“We had tremendous schedule pressures and the logistical challenges of building from the inside,” said Bosworth of his company’s work on the stadium, “but we completed the job on time to the day.” Bosworth credits the union ironworkers who worked 60-hour weeks to erect the more than 7,800 tons of structural steel that shapes the iconic and impressive, 21st century limestone and glass form of the stadium. At the peak of the project, a team of 45 ironworkers worked with two heavy lift cranes (a 330-ton and 300-ton) to put the steel structure in place in record time.

A third-generation union ironworker himself, Bosworth came up through the ranks, following his father and grandfather in that trade and commitment to union principles of being the best and doing the best.

Today Bosworth is on the owner/manager side of the equation; with revenues above $30 million, Bosworth Steel (www.bosworthsteel.com) is one of the top erectors in the U.S. Though he has scaled the heights of his industry, Bosworth has not moved away from his respect for his roots as a union ironworker. He serves as president of the Signatory Contractors Association affiliated with District Council of Texas and the Mid-South (www.ironworkerstxmidsouth.com) – the organization representing union ironworkers in Texas, Oklahoma, Louisiana, Mississippi, Arkansas and the central Gulf Coast. The District Council is part of IMPACT – the Ironworker Management Progressive Action Cooperative Trust (www.impact-net.org) a collaborative, national initiative between the Iron Workers Union and leading construction companies, fabricators and steel erectors.

The coalition focuses on enhancing the industry from quality and safety perspectives and building market opportunity for signatory contractors and union ironworkers.

Bosworth is positive about the merits of his relationship as a business owner with the labor union central to his industry. For him it is about delivering a quality product, no matter how complex the job, on time and on budget and skilled, experienced manpower is essential in that delivery. “You know,” Bosworth concludes, “I don’t think for one minute that I could have built a company like this and gotten it to where it is today with its financial strength or been able to build projects like DC’s Nationals Stadium without the skilled labor provided by the Ironworkers.”