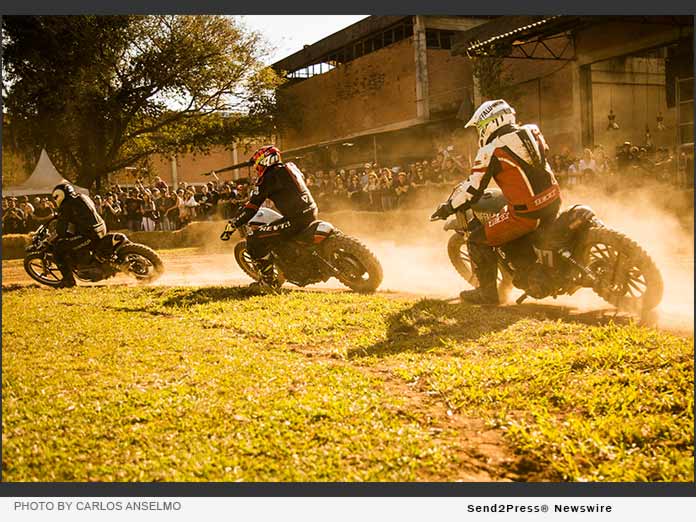 Forget soccer, Brazilians are motorcycle people — With record participation during the Milwaukee race, the Garage Metallica Brazilian team wants to bring more visibility to the sport south of the Equator

(MILWAUKEE, Wis.) — NEWS: It was only six years ago when the first official Flat Track competition took place in Brazil, with only ten to fifteen riders. Now, there are over fourteen teams around the country, and the Brazilian Flat Track League will have nine riders racing during FlatOutFriday (FOF) in Milwaukee, Wisconsin, March 13. The group is looking forward to making a good impression during FOF 2020.

Racer Chrys Miranda was the first Brazilian ever invited to FlatOutFriday, back in 2019. His experience and networking paved the way for the group’s record participation at this year’s event. The team will also have the first Brazilian woman to race in international flat competition.

“This is an important moment for the sport in Brazil, and to be part of an event as big as FlatOutFriday brings visibility to our efforts, and our racers. It also helps to spread the word in our country, the sport becomes better known, and, consequently, more people will become interested,” says Miranda. “With that, not only are we are keeping the tradition, but bringing more people to the race and, consequently, new athletes and collaborations.”

Miranda, who has been involved with the motorcycle culture in Brazil and the United States for decades, is one of the newly formed Brazilian Flat Track League founders. The League’s vision is to develop and foster the sport in Brazil, by introducing regulations, classes, and an official circuit calendar.

Events like “Lucky Friends Rodeo” and “BMS Motorcycle” already host some of the biggest Flat Track races in Brazil. In conjunction with showcasing builders, shops, and artists, both events are good examples of how the culture is growing in the country.

“We want to keep the tradition rolling,” says Flávio Luz, from Lucky Friends Rodeo who is another one of the League’s founders. “By introducing norms and new classes to the races in Brazil, we want to open opportunities to a broader group of people. It will not only help disseminate the sport but will bring attention to the professionals and the technology involved in all of the aspects of this race.”

The Brazilian FT League also has Cezinha Mocelin, founder of BMS Motorcycle, and Marcelo Creck, founder of Lucky Friends Rodeo, in its board.

Jeremy Prach, founder of FlatOutFriday and Mama Tried, feels that having the Brazilian racers at the events in 2020 is a big deal. “Who’ve thought that this culture that we have has touched people so far away. For that, I am most proud”, said Jeremy.

Data from 2018, shows that Brazil holds the largest South American motorcycle fleet, and it’s the 8th country in the world, with a fleet of over 26 million registered bikes and a market share in constant growth.