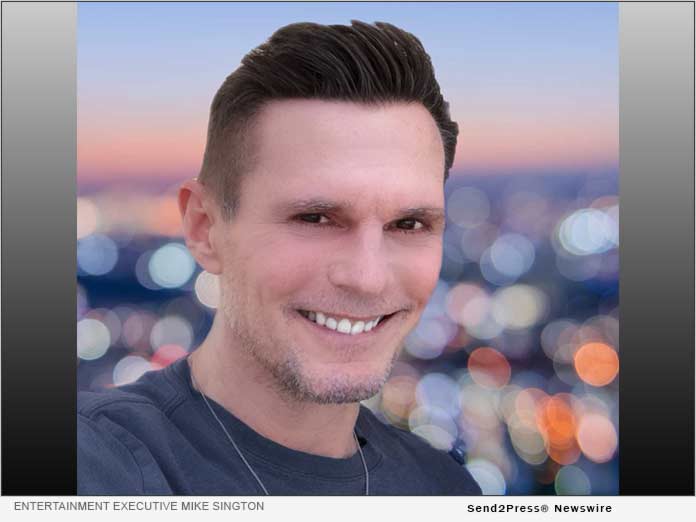 (LOS ANGELES, Calif.) — NEWS: Far too many people look back at their life with regret for the opportunities they let slip through their fingers, and the dreams they left unrealized. Mike Sington knew from an early age he wouldn’t be one of those people.

Like many growing up in America’s Midwest, he felt California, particularly Hollywood, calling from an early age. The Golden State appeared to be impossibly romantic and a land of limitless possibilities for those with enough nerve to gamble everything on the roll of a dice, for those prepared to ditch a steady job and income, pack everything they own into the trunk of a car, and head out West to live the dream.

The day before Sington was to start a great position with a major business corporation, he did precisely that. He called the company and told them he was California bound. Although he had no job, no place to live, and had zero contacts in Hollywood, he knew if he didn’t take the chance at that precise moment, he would live the rest of his life in the terrible shadow of ‘What if?’

“As a kid, I was obsessed with movies and television shows,” says Sington. “The world I saw on the silver screen was a world so unlike my own, and a world, someday, I wanted to be a part of.”

Sington’s first small taste of Hollywood came when he did a handful of commercials while studying for a business degree. He thought, “What a fun way to make a living. Beats the world out of business hands-down!”

From then on the die was cast, and Sington’s decision to go West pretty much made itself. When he first arrived in Hollywood, Sington turned his hand to what many fresh-faced newcomers to Tinseltown do – waiting tables.

Sington describes, “As a side hustle, it didn’t last long. I was fortunate to get a great gig as a tour guide at Universal Studios. It was a dream job for someone like me. I got paid to show off my passion for all things Hollywood to tourists from all over the world.”

A couple of months into the job, Sington decided to rewrite the studio tour script and sent it to the Studio President’s office. Four days later, Sington was sitting in the President’s office and was given a new job, which transformed his life. Sington explains, “On the strength of the script, the President asked me to create a formal training program for the guides. I ran with it, and that then snowballed into the Studio Tour Guide Academy.”

As the studio tour continued to grow, so too did Sington’s reputation at Universal. Within a few years, he was a senior executive.

Since then, Mike Sington has become something of an entertainment and pop culture guru. His insider knowledge of entertainment, celebrities, and pop culture is legendary. He’s been branded, ‘Hollywood’s Ultimate Insider’ with good reason. He’s the go-to expert on all things film and television related.

Yet to this day, if you ask Sington the secret to his success, he’ll tell you it’s pretty simple. “I learned from an early age to trust my gut, my instincts, and go where your passion leads.”

Sington adds, “I’ve been fortunate to have had some lucky breaks in this business and worked with some great people and mentors, but if I hadn’t followed my inner voice all those years ago, I’d hate to think about the sort of life I’d be living now. Put it this way, I’m now living the dream myself, but what makes it especially thrilling is I get to share that dream with people from all over the world. It’s something I never take for granted.”