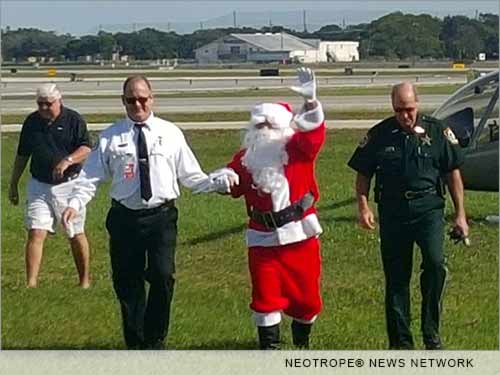 NEWS: Attorney David L. Goldman of the law firm Shapiro, Goldman, Babboni & Walsh attended the “Flight to the North Pole” event at the Sarasota Bradenton International Airport on Dec. 11, 2015. Organized by the Manatee County Sheriffs Office, the annual event is a benefit held for terminally ill children and their families.

The festivities feature a lunch and several live performances. The performances included holiday music from a children’s choir and played by bagpipers, while Santa’s elves and clowns entertained the children.

Held at the Sarasota/Bradenton Airport the event culminates with the arrival of Santa Claus by helicopter. After landing Santa meets with each child and their family to give them a wish list of toys and presents they had requested in their letters to Santa.

This was the 30th anniversary of “Flight to the North Pole,” and over 300 children were able to meet with Santa who personally delivered them their presents. There are 117 families that participated, each having a terminally ill child whose uncertain and precarious futures are given a brief moment of magic and joy.

Attorney David L. Goldman had this to share about the event, “For 30 years Sidney Ettedgui of the Manatee County Sheriffs Office has been organizing this event and takes great pride in its growth over the years, and in the support received by the Manatee County Sheriffs Office and countless others who volunteer their time and services to make the event such a success. To see the community come together to help these children is truly touching and heartwarming.”

David Goldman has a long-standing commitment to the community and has served as a board member of many civic organizations. He has worked extensively with the Gulf Coast Latin Chamber of Commerce, the Sarasota African-American Chamber of Commerce, Second Chance Last Opportunity and the Westcoast Center for Human Development. He has also served on the Board of Directors of the Sarasota-Manatee Jewish Community Center and has been a director and member of the Endowment Fund of his local synagogue.

*PHOTO: Santa Claus Arrives at the Sarasota/Bradenton Airport to visit with terminally ill children during a benefit entitled “Flight To The North Pole.”

Classic Easyriders is back in time for 2021 Holiday Season: Get a Limited Edition David Mann Ghostrider Tapestry Sep 28, 2021