Rural and medically underserved populations of eight western North Carolina counties will now have improved end of life care, thanks to a model education and training program of Four Seasons Compassion for Life. The program is funded by Health Resources and Services Administration, a division of the U.S. Department of Health and Human Services. 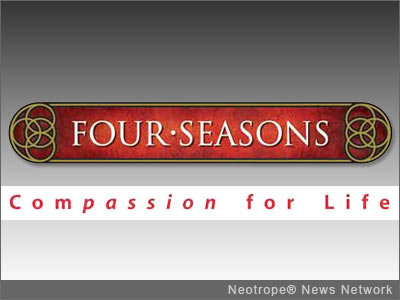 FLAT ROCK, N.C. /eNewsChannels/ — NEWS: Rural and medically underserved populations of eight western North Carolina counties will now have improved end of life care, thanks to a model education and training program of Four Seasons Compassion for Life. The program is funded by Health Resources and Services Administration, a division of the U.S. Department of Health and Human Services.

For those with life-limiting or advanced illness, “the program will improve patient outcomes and quality of life, and reduce costs for all parties involved,” according to Rebekah Reeves, a registered nurse and program director.

“The patient and family remains at the center of everything we do,” says Renee Barnwell, a registered nurse who serves on the program team with Reeves as project manager.

Led by specially trained nurse leaders, patient-centered teams will share information across disciplines, creating and expanding opportunities for professional collaborations at all levels.

The program is fully funded by a $1,419,046 federal grant disbursed in installments by HRSA over three years, with a substantive focus on nurse leadership through education, practice, quality, and retention. In order to fully benefit rural and medically underserved populations in western N.C., the program involves co-operation and collaboration with local hospitals, area universities, and community-based non-profits, among others.

“We don’t want to keep this program to ourselves,” says Barnwell. “This way of practicing nursing is a way to develop, implement, and achieve very high patient outcomes, reduce costs related to health care, and increase patient and family satisfaction.”

The overarching goal is to enhance Four Seasons’ existing team model into a robust, sustainable collaborative practice model which can be shared with other hospice and palliative care providers at the regional, state and national levels.

“Rural Americans suffer a heavier disease burden than those living in urban areas,” Chris Comeaux, chief executive officer of Four Seasons, said. “Rural counties tend to be poorer by comparison, and individuals in rural counties in western North Carolina are more likely to live below the poverty line.”

In western North Carolina, the poverty level ranges from 12.4 percent to 20.5 percent of the population, compared with 16.2 percent for the state.

Additionally, in 2013, in Buncombe County alone, the numbers of individuals aged 60 and over is expected to nearly double, he says. By some estimates, 42.8 percent of Buncombe County residents are already either baby boomers or older. In neighboring Henderson County, the number of persons aged 65 and older is 23 percent, compared with the state average of 13 percent.

Four Seasons Compassion for Life – – is a state leader in hospice and palliative care, serving individuals across western North Carolina.

“The disparity in social and economic status in rural areas throughout the region is underscored by needs of an aging population,” adds Comeaux. “We are very excited that this program will directly address those needs and have a direct impact on the future of palliative and end of life care.”

Move For Hunger Receives $25K Grant from The Provident Bank Foundation May 26, 2021