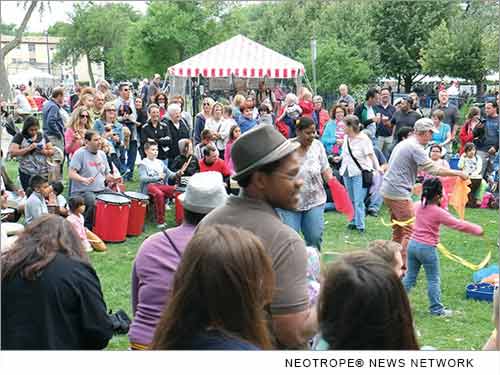 “We have something going on at the festival at all times for people to experience,” said Cyd Smillie, Festival Steering Committee member and Arts Alive Chicago Founder and President. “We have so many opportunities for families and friends to enjoy all types of artists all weekend long and we encourage them to participate.”

New for this year’s festival is a promotion calling all those with the name “Jeff” or have “Jeff” in their name to get into the festival free with a companion on Friday, July 25th-only by presenting proper identification.

The festival also is enticing fest-goers with a special Groupon offer: http://www.groupon.com/deals/jefferson-park-chamber-of-commerce-1 .

Back by popular demand is John Yosts’ Drum Circle where everyone gets a chance to play an instrument and be a part of the rhythmic beat with Saturday and Sunday performances. Those interested can decorate their own drum to play and take home.

On Sunday, July 27 from 3-4 p.m., Aerial Dance Chicago will unveil a new spinning hoop piece with aerial fabric and trapeze artists. Following the performance, there will be an opportunity for audience members to experience aerial dance and acrobatic dance hands-on. Open to all ages.

C3 PhotoART Fest II will present 50 juried art show works of art. Fest-goers are invited to vote on their “People’s Choice” and award the artists at the show.

Musicians like Ryan Wilkins, Yoko & the Oh No’s, Zydeco Voodoo and more will create quite a buzz with their soulful music and grooves.

Sunday, July 27: Brushville one of the hottest rockin’ country bands, winner of the 2012 Battle for the Saddle and known to have shared the stage with the biggest names in country music.

How do I get to Jefferson Park?
Jefferson Memorial Park is located at 4822 N. Long Avenue, just west of Milwaukee Avenue. Fest-goers are encouraged to take public transportation, as the Jefferson Park Metra and CTA Blue Line transportation hub is just a block from the festival grounds. Plenty of bike racks also will be available.

Jeff Fest is presented by 45th Ward Alderman Arena, Jefferson Park Chamber of Commerce in partnership with the Jefferson Park Advisory Council and the Chicago Park District along with media partner 93.1 WXRT Chicago.

Road closures: Linder Avenue will be blocked off between Higgins and Lawrence Avenue for the three-day festivities.

For more information, go to http://jefffest.org/ .

Be sure you are the first to hear of announcements and plans for Jeff Fest and follow @JeffFestChicago on Twitter and Jeff Fest Arts and Music Festival on Facebook at https://www.facebook.com/pages/Jeff-Fest-Arts-Music-Festival/96599731822 .