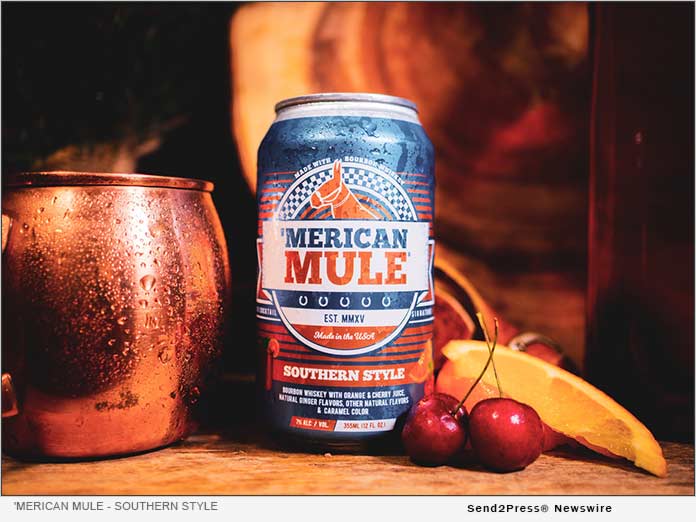 (NORWALK, Conn.) — NEWS: ‘Merican Mule, one of America’s fastest growing canned cocktail brands, has announced the expansion into new states in the Northeast and Southern U.S. The company designs new age variations of the Moscow Mule cocktail, made with premium spirits, ginger, and fruits, in 12oz cans.

The expansion marks a key milestone of growth for the brand, which is sold in thousands of retailers, including select Total Wine & More, Whole Foods and Target locations. Despite the challenges related to the COVID-19 pandemic, ‘Merican Mule has seen an unprecedented rise in sales.

“We anticipated challenges due to the pandemic, especially being a higher quality, premium brand,” explained Dean Mahoney, ‘Merican Mule’s Founder and CEO. “But customers are still discovering our liquid, and once they try it, they are sharing with family and friends more than we ever could have imagined. We’re excited to be expanding to new regions.”

Mahoney also commented that humble beginnings might be resonating with customers. “We really appreciate that our story is being shared. Back in 2015, we were just three young professionals that decided to do something innovative with our lives savings. Now we’re at the forefront of the new frontier with canned cocktails.” Mahoney met his cofounders while working in the technology sector.

In addition to the geographic expansion, ‘Merican Mule has launched a new canned cocktail, the Southern Style Mule. Typically referred to as a ‘Kentucky Mule’ on bar menus across the country, the ‘Merican Mule – Southern Style is made with bourbon whiskey, natural ginger, refreshing orange and a hint of cherry. The bold beverage resembles a cross between an Old Fashioned and a Moscow Mule, standing strong at 7% ABV.

‘Merican Mule plans to announce additional states where their beverages will be distributed, later this year.

‘Merican Mule is a premium, canned cocktail brand that delivers convenient, bartender-quality Moscow Mules made with real, premium distilled spirits, ginger, and all-natural ingredients (instead of malt or alcohol from cane sugar like most hard seltzers). Since coming to stores in 2017, ‘Merican Mule now distributes in nine states and thousands of retail locations, offering four flavors at 7% ABV: their flagship Moscow Style Mule (with vodka), the Mexican Style Mule (with tequila), the Tropical Style Mule (with rum), and the Southern Style Mule (with bourbon whiskey).