MEDFIELD, Mass. — Mitchell Construction Group, Inc., a multi-award winning design and renovation firm located in Medfield, is pleased to announce they are the recipient of two 2008 Gold Contractor of the Year (CoTY) Awards from the Eastern Massachusetts National Association of the Remodeling Industry (EM NARI) in the categories of “Best Kitchen Remodeling” and “Best Exterior Renovation.” The NARI is the only trade association dedicated solely to the remodeling industry. With more than 7,000 member companies nationwide, the Association is considered “The Voice of the Remodeling Industry.” 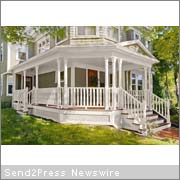 The eastern Massachusetts chapter, one of the largest in the country, hosts this competition annually to recognize the most exceptional remodeling projects and the companies that built them and is widely considered the premier competition of its kind throughout the remodeling industry.

An impartial panel of judges, who are considered experts within the industry and associated fields, selected winners based on each entrant’s “Before and After” photography and scope of the project. Judging was based on problem solving, functionality, aesthetics, craftsmanship, innovation, degree of difficulty and entry presentation. This year’s awards were considered the most competitive in the organization’s history with a record number of entrants.

“We are pleased to be recognized by our peers and honored with two of these prestigious awards,” states Tom Mitchell, President, Mitchell Construction Group, Inc. “I am continually proud of the Mitchell team and their ability to approach each and every project with an open mind, enthusiasm and innovative design ideas while never losing sight of customer satisfaction.”

Mitchell Construction Group, Inc., located in Medfield, specializes in architectural design and construction of residential kitchens, baths, additions, and whole house renovations. Recognized for two consecutive years for their commitment to customer service, Mitchell is also the recipient of a number of industry awards including Qualified Remodeler Magazine’s “Top 500” company in 2008, 2007, 2006, 2005 and 2004. The company was also named one of the “Big 50” by Remodeling Magazine in 2006. The company also received the Gold Award from the PRISM, sponsored by the Greater Boston Builders’ Association at their last awards installment in 2007.