The National Inclusion Project is pleased to team with the Foundation for Respect Ability to musically demonstrate what inclusion is all about at their 10th Anniversary Champions Gala on October 12, 2013 in Charlotte, N.C. The performance will feature an inclusive group of Charlotte school children singing multiple songs about respect for all children. 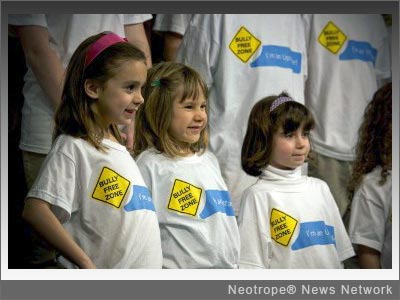 CHARLOTTE, N.C. /eNewsChannels/ — NEWS: The National Inclusion Project is pleased to team with the Foundation for Respect Ability to musically demonstrate what inclusion is all about at their 10th Anniversary Champions Gala on October 12, 2013 in Charlotte, N.C. The performance will feature an inclusive group of Charlotte school children singing multiple songs about respect for all children, including “Don’t Laugh at Me” along with Sid Krupkin, the Foundation for Respect Ability’s Artistic and Education Director.

“Having local children from the Foundation for Respect Ability programs spread their message of tolerance and diversity through song, seemed like the perfect fit for our event about inclusion. We are excited about their performance and know that all attendees will be inspired by their songs,” says Jerry Aiken, Executive Director of the National Inclusion Project.

A study published in the journal Pediatrics that looked at more than 1,450 students in fourth through sixth grades, showed that children with disabilities missed more days of school and had lower grades. The research team from the University of Pennsylvania, Johns Hopkins and Marshall University showed that the same kids also reported higher levels of bullying and were less likely to feel safe in school.

The Foundation for Respect Ability ( http://foundationforrespectability.org/ ) seeks to convert “bystanders” into “upstanders” and offers anti bullying programs and services to the community. The non-profit organization conducts workshops, community concerts and in-school programs where the activities and message of diversity and tolerance are primarily delivered through music.

“Our goal is to facilitate opportunities for communication and to develop programs and strategies for helping parents, students, and educators as they deal with bullying, conflict and character development issues,” states Diane Benson, Executive Director of the Foundation. The organization is modeled after Operation Respect a non-profit founded by Peter Yarrow of the legendary folk trio Peter, Paul and Mary.

The 10th Anniversary Champions Gala will be hosted by co-founder Clay Aiken and be held on October 12 at the McGlohon Theater at Spirit Square in Charlotte, N.C. at 8 p.m.

Tickets are currently on sale online through www.carolinatix.org and on the phone or in person at the Blumenthal Performing Arts Box Office at (704) 372-1000, Belk Theater Lobby at 130 North Tryon Street in Charlotte, N.C. For more information about the event, please visit the website at http://www.inclusionproject.org/gala/ .

About the National Inclusion Project:

The National Inclusion Project was co-founded in 2003 by entertainer Clay Aiken, and works to bridge the gap between young people with disabilities and the world around them by opening doors for all children to be included together, primarily achieved through recreational programs and training to make after school programs, summer camps and classroom activities inclusive for all children.

To date, the Project has partnered with over 200 programs nationally and has impacted over 50,000 children. For more information on the National Inclusion Project and to help ensure no child sits on the sidelines visit their website at http://www.inclusionproject.org/ .