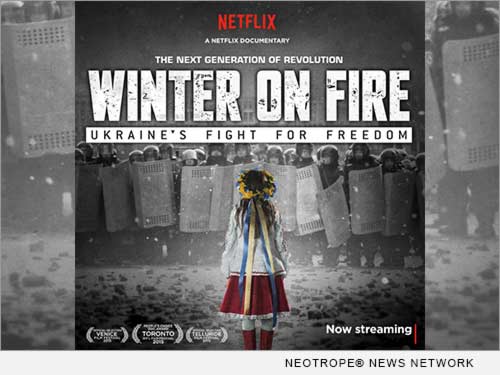 NEWS: American-Russian Business Council (ARBC) is pleased to announce that its member and director of the Netflix original documentary “Winter on Fire: Ukraine’s Fight for Freedom,” Evgeny Afineevsky, has been awarded the Medal of the Cross of Ivan Mazepa by Ukrainian President Petro Poroshenko. Early this year Afineevsky already received Order of St. Prince Vladimir the Great from His Holiness, Filaret Patriarch of Kyiv & All Rus’-Ukraine. The film takes viewers behind the front lines of the Ukrainian uprising in 2013-2014.

“It is symbolic that the award is given to a Russian who fought for the independence of Ukraine and the formation of Europe. On behalf of the Ukrainian people, I am grateful for the work you’ve done,” said Poroshenko, noting the symbolism of the fact that it was the first such award he was presenting as President and it was given to an American of Russian descent.

The Cross of Ivan Mazepa honors citizens of Ukraine, foreign citizens or stateless persons for significant contribution to the revival of national, cultural, artistic, spiritual, architectural, military and historical heritage of Ukraine, for achievements in state, diplomatic, humanistic, scientific, educational and charitable activity.

“I am so honored to receive such an award on behalf of entire nation, for all hard labor that we’ve done,” said Afineevsky. “For all the bruises, concussions, and injuries that I and my true team got during these days and nights of documenting history for the future generation, for the people all over the world, that one day they can learn, what had happened in the middle of peaceful country, in the middle of Europe.”

In November 2013 Afineevsky flew to Kiev to observe Ukraine’s fight for its identity and to capture the revolution on film. The result is the powerful and inspiring documentary of anti-government demonstrations that startled the world. Afineevsky previously directed 2 other documentaries and seven award winning feature films. He is a member of the Academy of Television Arts & Sciences and Directors Guild of America.

About “Winter on Fire: Ukraine’s Fight for Freedom”:

“Winter on Fire” is a documentary on the unrest in Ukraine during 2013 and 2014, as student demonstrations supporting European integration grew into a violent revolution calling for the resignation of President Viktor F. Yanukovich. “Winter on Fire” has had astonishing success at Venice International Film Festival and Telluride Film Festival, and won the People’s Choice Documentary Award at the 2015 Toronto International Film Festival.

Los Angeles Times’s Kenneth Turan wrote that “‘Winter on Fire,’ is imbued with a single and quite heartening spirit” and it is “an examination of what societal change looks like moment to moment.” A.O. Scott (New York Times) called the movie “Powerful,” adding “it tells a vivid tale of heroism and villainy.” Mark Johnson from Awards Circuit noted it was “the best documentary I’ve seen this year.” Tricia Olzewski (The Wrap) identified the film as “a testament to the human spirit.”

The Narrow Bridge: War Between Russia and The West Over Ukraine Comes in A New War Drama Now on Amazon Prime Jan 27, 2022

'Christians in the Mirror,' a first-of-its-kind independent documentary, now on PRIME Video Dec 3, 2019