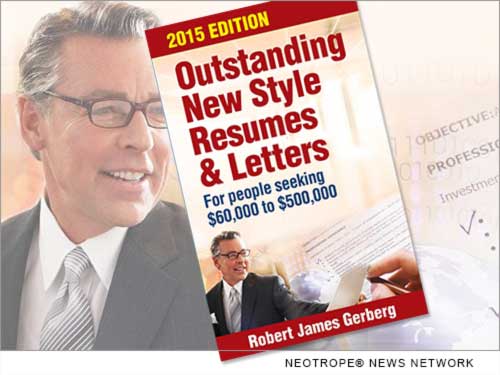 NEW YORK, N.Y. /eNewsChannels/ — NEWS: With record numbers of resumes in circulation, Robert Gerberg, creator of the TAPIT Worldwide System and author of “The Professional Job Changing System” and dozens of other books on job hunting, has released entirely new guidelines for professionals and executives, in “Outstanding New Style Resumes and Letters – 2015 Edition.”

His new e-book “Outstanding New Style Resumes and Letters – 2015 Edition: For people seeking $60,000 to $500,000” is available on Amazon for $2.99. It encourages even the most talented professionals to literally throw out everything they thought they knew about how to write outstanding resumes that can potentially produce a continuous stream of calls.

Why is a complete rethinking of resumes required? Well, the job market has changed more in recent years than in previous decades combined. Staffing industry experts claim at least 30 million resumes are in circulation all the time. Top recruiters, such as Heidrick and Struggle, Korn Ferry, and Russell Reynolds, receive thousands of resumes each day.

What’s more, blue chip firms, such as ExxonMobil, PepsiCo, GM, and AT&T, are said to receive more than half a million resumes each year – but only hire one in every 500.

The harsh reality, as Mr. Gerberg points out, “is that having great resumes is more important than ever before. Nevertheless, even among the most successful professionals and executives, he claims that more than 95 percent of all resumes being circulated are inadequate. In short, they do an injustice to the real talents a person possesses.”

Today traditional resumes are average in appearance, disclose major liabilities, are rarely scanning ready, and sometimes are even unclear as to the exact jobs people are seeking. Perhaps most significant, they rarely address what a person can contribute. More than ever before people are hired for what they can do-the transferable skills they can bring to meet challenges and help companies expand.

The fact is that people get hired by employers based on their expectations on what each person can do for their organization. Mr. Gerberg’s concept is simple. The growth in the use of computers, the Internet and emails has resulted in companies receiving 100 times more resumes than in the past. And to complicate matters, during this period hundreds of thousands of employers have also embraced resume scanning software and have shifted to new ways of selection.

In his short and easy-to-read e-book, he introduces completely new styles of resumes-materials that have already been proven successful with tens of thousands of professionals and executives at all income levels. He also introduces an entirely different and state-of-the-art philosophy regarding the use of stand-alone marketing letters for producing high levels of interviews.

He believes these are extremely important for anyone who is unemployed, who has age concerns or other liabilities to conceal, and who seriously wants to attract a high level of employer interest. Most important, the ideas in this easy-to-understand book are also remarkably simple for anyone to put into action.

About the Author, Robert James Gerberg:

Robert James Gerberg is among America’s foremost authorities on professional job hunting. For more than 25 years he has authored dozens of books and multimedia presentations. He is also the creator of the TAPIT Worldwide System – a way for people to instantly connect with 97 percent of all jobs that are advertised anywhere in the U.S. – and also recent continuous daily leads and contacts.

His current e-books available on Amazon.com include “20 New Rules for Job Hunting Success,” “An Easier Way to Change Jobs,” “The 12 Most Popular New Career Directions for Executives,” “The Ultimate Guide to Interviewing and Negotiating,” “What To Do If You’re Unemployed or Have Age Concerns,” “2015 Career Guide for People Leaving Education, the Military or Wall Street,” and “Outstanding New Style Resumes and Letters.”

New Book, 'Leaning On Mom: Letters to Roberta, How a Mom of Three with Autism Found Strength During the Pandemic' Sep 9, 2020