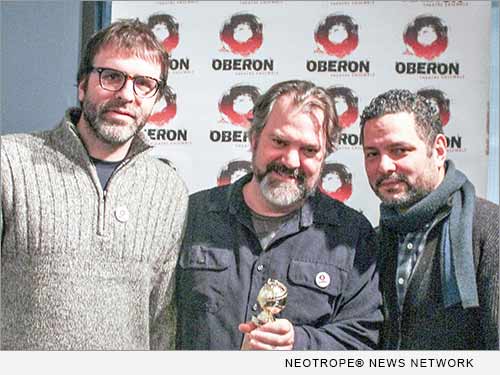 There is a reception at 6 p.m. followed by the performance at 7 p.m.

Tickets are $124. For information and tickets visit http://www.oberontheatre.org or call Ovation Tix at (212) 352-3101. Seating is extremely limited.

Founded in 1997, Oberon Theatre Ensemble is an off off Broadway ensemble theatre company. Now entering its 19th season, Oberon has produced 57 full length productions and 100 staged readings of original plays. Oberon has 20 active members and many more regular collaborators, including award winning actors, playwrights, directors and designers. Oberon Theatre Ensemble is an active player in New York’s independent theatre community. Oberon believes in the joy of a well told story, the connection offered by a supportive community, and the magic of the theatre.

Tickets are $124. For tickets and information visit http://www.oberontheatre.org or call Ovation Tix (212) 352-3101. Seating is extremely limited.

Long Wharf Theatre in Connecticut Asks Its Fans to Become Its Members Oct 6, 2020