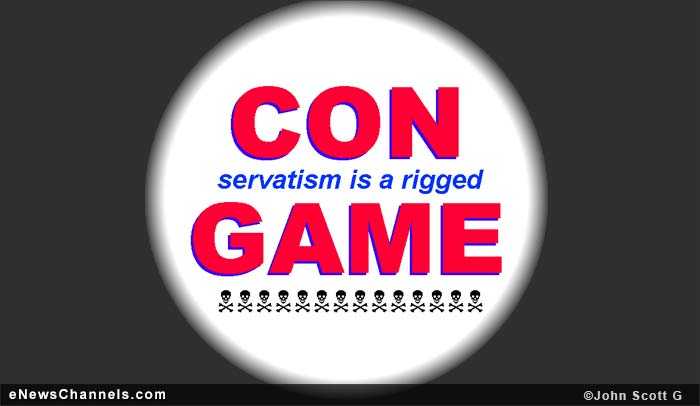 With a shudder in my soul and hand sanitizer in my pocket, I went to interview a couple of operatives in the bowels of the conservative cabal. Er, conservative coven. Um, conservative clan? Just WTH do you call this human debris, anyway?

Getting a handle on what’s behind all the crazy conservative cliques that are infecting America seemed like a good idea for this election year. Despite how disgusting it is to be in close contact with republicans, I made this supreme effort in order to bring you some perspective on their abhorrent views. You’re welcome.

After a number of phone calls, e-mails, and turning over of mold-encrusted rocks, I was able to get in touch with two men who work hard every day to undermine the ideals of the United States by promoting candidates and positions that reflect the point-of-view of RWNJD (rightwing nutjob douchebags). At first they were wary but I assured them that their identities would not be revealed.

Befitting the serious nature of our conversation, the three of us met in a dank and dark bar, a sprawling establishment effused with the odor of stale beer and sweat. Fittingly, rumor has it that the place is mob-owned.

The two GOP operatives were in their business clothing: suits, white shirts and ties; I was in my business clothing: jeans and a Free Pussy Riot tee-shirt. Both of the rightwingers were initially nervous over revealing some of the truth about their ilk, and I was continually scared that someone I know might see me with them, but we put our fears aside and got down to business.

“You guys work for conservative organizations as well as the republican party itself, is that right?”

“Yes, indeed,” said the one who was such a neat freak that he was rearranging everything on the bar to be more symmetrical.

“Sure do,” said the one who could hardly bear to touch anything on the bar.

“No, I meant is it right to do that?” They exchanged puzzled glances. “You know, because of the whole treason thing.” They just laughed so I pressed on. “Okay, let’s try this: How do you describe yourselves?” I asked them.

“We’re a sect that leads a movement,” fussy said.

“Righteo,” priggy said. “But I think it’s important for you to distinguish between the two main types of conservatives.”

“You betcha,” said fussy, unconsciously mimicking one of Sarah Palin’s catch-phrases. “On one side, there are those of us who run things and do things and accomplish things, but on the other side you find the GU-GOP.”

“That’s how we refer to the Great Unwashed of the GOP. You know, the moron base.”

“Ah, I see,” I said. “Funny, but that’s similar to how the rest of us refer to them. Now, when you say ‘accomplish things,’ what exactly are you talking about?”

“All the important legislation we help to bring about through our subordinate cells and cults. You know, organizations like the fake think tanks, Heritage and Cato, and the corporate thug group, ALEC.”

“You got it,” said priggy. “Man, ALEC is just greatness personified! I mean, think about it: ALEC is a secret society that operates in plain sight. Well, it did until the progressives starting shining light on it. It still works, just not as well as before.”

“Darkness?” I asked, trying to be helpful.

“Liars and thieves,” he said. “They don’t like media attention.”

“But,” I said, “how do you explain loathsome people like Sheldon Adelson, Kenneth Langone, Tom Perkins, Steve Schwarzman, and Donald Trump? They don’t seem to mind saying ridiculous and even hateful things in public.”

“Those assholes are detested by the quiet republican donors,” priggy said. “All the people behind the scenes of the GOP are upset about publicity.”

“And the DeVos family?”

“And the Walton family.”

“So, you’re saying that these creatures are frightened of decent people seeing their actions?”

“Exactly. If normal people begin to know about the Koch crazies and the DeVos deviates, a couple of very bad things might happen. First, the forces of degeneration would have to find other sources of funding.”

“Plus, the mansions of these clowns might have hordes of people outside, all carrying pitchforks and torches.”

“Not going to happen,” I said. “If people didn’t form pitchfork-and-torch brigades to take down Angelo Mozilo of Countrywide they probably aren’t going to do it over the Kochs, DeVos, and Walton families, no matter how odious they are.”

“And weigh the options.”

“But a lot of what is done on impulse will be wrong,” I pointed out.

“No problem,” said priggy. “The government can sort it all out later. We have to keep moving. GOP politics is like a shark.”

“Oooh, that’s good,” fussy said. “Let’s do some focus groups on that. Maybe try something like ‘Government Bites and the Right Bites Back!’ What do you think?”

They looked at each other and said in unison: “I don’t, that’s why I’m a republican!” Then they laughed and high-fived each other.

“Look,” fussy said to me, “there’s something you have to understand. The electorate as a whole is just incredibly stupid.”

“Absofreakinlutely,” fussy said. “On one side, you had a basically decent centrist whose big sin was that he was a nigg– uh, a black man — and he was running against a guy so ill-equipped to be the leader of the free world that he was known as ‘Unfit.’ But still, look what happened.”

“That was so totally embarrassing for our country,” fussy admitted. “I mean, Mitt was a guy who managed to utter a lie, a prevarication, a distortion, or a contradiction every 4.6 minutes of the campaign.”

“Right,” priggy said. “Although, to be fair, he sometimes combined contradiction with prevarication.”

“Or lie with distortion.”

“Or sometimes all four in the same paragraph.”

“And he maintained that pace for months.”

“Right, for months. It was an astonishing feat, really. So you have to ask yourself why would anyone with an I.Q. above eighty vote for him? Gotta be because of the work people like us did to fan the flames of racism, right? Playing on the fears of stupid people.”

They looked at each other and broke up laughing. “He’s on to something!”

“Yup, he’s been to some GOP campaign events!”

There was a pause. I fought off a wave of nausea and continued: “Does anyone on the right believe any of their own crap?”

“Sure, some of them. Bullethead is a believer.”

“Who is Bullethead?” I asked.

“Right, and Dungheap was always a believer.”

“And Dungheap would be…?”

“Yeah, poor Roger. May he rest in peace.”

They just stared at me. “Don’t you know?”

“Roger Ailes died two years ago. That bloated hulk that they keep ferrying around from penthouse to limo to Faux News HQ — that’s just made out of latex and animatronics.”

“No, I didn’t know that,” I admitted. “Okay, well, don’t those weirdo billionaires like Perkins and Adelson and Foster Friess truly believe their own bile and B.S.?”

“Sure, I guess,” priggy admitted, “but they’re just little blips in the news cycle. The real drumbeat of bloviation is on Faux News and DTR.”

“Rush?! That dirtbag and his Excrement in Broadcasting network?!!”

“Rush is a mental defective who is high on hillbilly heroin and KFC every day. It’s a miracle of Lucifer that he’s still alive.”

“Although his handlers are looking into the animatronics that they used on Dungheap.”

“I can imagine,” I said. There was another pause. I was sweating with the effort of not screaming at these sorry excuses for human beings. With a superhuman effort (if I do say so myself) I maintained control in order to conclude the interview. “So,” I asked, “why are you working for people you know are stupid, offensive, ugly, vicious, racist, treacherous, and treasonous?”

“Are you kidding?” fussy said. They looked at each other and then spoke in unison again:

“Yeah, that’s what I said,” fussy pointed out.

“So basically,” I said, “everything the left says about republican operatives is true?”

“That’s about the size of it,” priggy added. “Conservatism is all a big con job. Although there is one point where you guys have it wrong.”

“Progressives always insist that the republican party lacks diversity and I’m here to tell you it just isn’t so. We have plenty of diversity.”

“The right has diversity?” I said. “But everything about the rightwing in the US seems built on bigotry, intolerance, racial bias, hatred–”

“And you’re proving our point with that list. See how much diversity you just named!” Fussbudget seemed so proud.

“The republican party is a big tent,” added priggy. “We’ve got Southern and Northern morons. We’ve got Southern and Western slack-jawed yokels. We’ve got rural and urban bigots. We’ve got male and female know-nothings. We’ve got morons and cretins. We’ve got stupid anti-American republicans and stupider Tea Baggers with their whole American Taliban thing. Why, there are actually a few black, brown, and Asian rightwing nutjobs. We’ve even got Charles Krauthammer, whatever-the-hell that thing is. So you can see that today’s conservatives are an amazingly varied group!”

Editorial note: the above is a satirical piece and not based on an actual live interview. Any resemblance to actual people or their political bent is entirely coincidental. Or is it?

This “satirical” opinion piece is Copr. © 2014 by John Scott G and originally published on eNewsChannels.com – all commercial and reprint rights reserved. Illustrations by and © JSG. Read more from JSG at: https://enewschannels.com/author/scott-g-the-g-man/ .