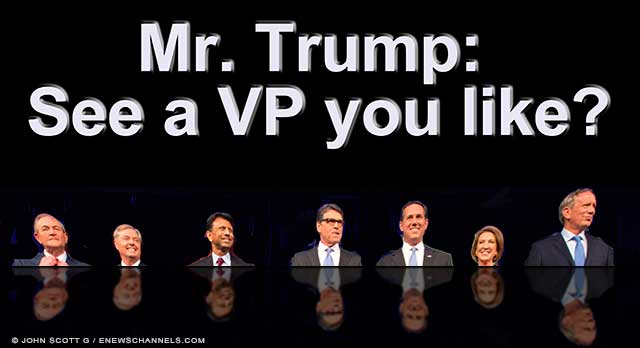 In afternoon and evening events for the GOP presidential candidates, seventeen anti-Americans bloviated their filth and bile on nationwide TV. The alcohol started flowing during the hour-long “race for the VP nomination.”

Setting up a meeting with my two favorite Republican campaign operatives was difficult at first. My idea was to have them join me in watching the two GOP “debates” on the Fox fake news channel and give me their unfiltered comments in real time.

Having anticipated that an inducement would be necessary, I went to Bev-Mo and stocked up on their favorite libations (Jagermeister for Skunkbreath, Raspberry vodka with Mountain Dew for Wetpalms).

“Oh, well, that’s different,” Skunkbreath said. Both of them showed up with some rules for a drinking game which they played from the start of the first event until the signoff of the second event.

“We take a shot every time one of the douchebags says something stupid,” Wetpalms said.

“And we take double shots if they mention ‘conservative values.’ That,” Skunkbreath said to me, “is the GOP’s greatest oxymoron.”

Since Republicans cannot get through any public meeting without spewing those terms, we all knew that Wetpalms and Skunkbreath would be taking a lot of shots.

So, the beverages were lined up, the two guys settled into overstuffed chairs, we fired up the big screen TV with surround sound, and here’s what happened:

The first debate began in a nearly-empty arena with the questions and responses ringing with echoes bouncing off the thousands of empty seats.

Rick Perry stumbled through his first answer, meandering all around the topic. “Jesus, he looks like a deer caught in oncoming headlights,” Wetpalms said.

Carly Fiorina tried talking about her successful business record. Skunkbreath snorted and said, “She nearly tanked a Fortune 500 company!” They each took a shot.

Rick Santorum talked about his Senate track record of getting things done. “Yeah, what he got done was losing his reelection by 17 points.” They each took a shot.

Bobby Jindal ignored the first question and earnestly said some stuff with a bunch of unverifiable claims and unquantifiable numbers. “What the hell is that little twerp blathering about?” They each took a shot.

Lindsey Graham mentioned the environment. “What a liar. He always votes for whatever industry pays him the most.” They each took a shot.

George Pataki’s first answer became instantly eligible to receive an award for stringing together the most platitudes, bromides, and hackneyed phrases in sixty seconds. Skunkbreath and Wetpalms looked at each other and refrained from drinking. I inquired about this. “Saying something meaningless wasn’t one of the triggers,” Wetpalms said. “Just stupid, misleading, or untrue.”

Jim Gilmore’s first answer was a droning recitation of his resume, including being a governor during the 9/11 attack, which is hardly a qualification. The GOP operatives exchanged glances, shrugged again, and each took a shot.

At this rate, it seemed likely my two sources would be comatose before the main debate even began. I slowed things down by claiming we had to send out for more ice.

Things proceeded in a desultory manner with the two Faux News mannequins reading their questions while pretending to know the meaning of all the words, and the seven hapless also-ran candidates flailing through their responses with a mixture of snark and phony enthusiasm.

I would try to entertain you by quoting some of their typical Republican stupidity but I fell asleep.