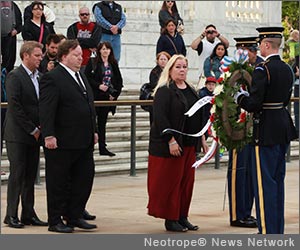 A group of sixteen invited to our nation’s capital arrived for ceremonial events, headed by Stephen Rollins, a motion picture writer, producer, and director, serves as CEO for Lightning Pictures LLC and NFMFS, and a 2012 Independent Presidential Candidate. Three others from the Rollins group receiving honors and recognition were actor and comedian Jay Flats, film and television actress Becky Patterson, and producer Jane West.

On Monday, April 21, the week-long festivities began with a wreath-laying ceremony at the Tomb of the Unknowns at Arlington National Cemetery. On Tuesday, April 22, Rollins, Flats, Patterson, and West visited Capitol Hill and received Congressional Commendations. In addition, each then received notification that flags were being flown over the United States Capitol that day in their honor.

Rollins’ group is being honored for their work with charitable organizations, ranging from military to family and children support. Rollins produced and directed a short film version of American Identity, which honored our military and their response following the events of 9/11. Rollins will be bringing the feature version to the theaters later this year, and plans to donate portions of the proceeds to charitable organizations, including military and family support.

Following his presidential campaign, Rollins launched NFMFS to provide assistance with mental and medical needs for our returning military, in hopes of helping reduce the number of military suicides.

Producer Jane West was the key in bringing the short film version of American Identity to life leading to the feature, and continues to support charitable causes through their work. Mr. Flats and Mrs. Patterson, in addition to their involvement with the feature version of American Identity, are distinguished members of the Hollywood community and contribute exceptional work with charitable organizations such as the KingsCare Foundation. Flats, in addition to his acting, is a stand-up comedian, performs pre-show entertainment for shows such as American Idol, and is the in-arena host for the Los Angeles Kings hockey team.

Becky Patterson has appeared in numerous projects as an actress, and is also part of the Los Angeles Kings Ice Crew team. They proudly use their talents to give back to those in need. It is for these works that this group received invitations to Washington, D.C. to be recognized and applauded.

Event locations for the group included Rollins and West visiting the 9/11 memorial in New York City, then making their way to Washington to join their group for the special wreath ceremony as well as events that included meetings with congressional leaders on Capitol Hill, attending a session of the Senate, and visiting the Pentagon and the White House.

More exciting events and invitations are forthcoming for Lightning Pictures LLC and NFMFS. The goal of the group is simply to entertain, while bringing recognition to those in our military and communities in need.

News Summary: Congressional and Political dignitaries welcomed members of the National Foundation for Military Family Support (NFMFS), as well as members of the motion picture ‘American Identity,’ to Washington D.C. to be recognized through special events, including receiving Congressional Commendations.

Published on eNewsChannels.com on Apr 29, 2013. This version of news announcement is Copyright © 2013 eNewsChannels™ and the Neotrope® News Network – all rights reserved. Reproduction in whole or in part for commercial purposes is prohibited unless under license. Made in the USA.