LA BAULE, France and LOS ANGELES, Calif. — Terry Murphy, President and CEO of California-based solar thermal power company SolarReserve, has been tapped to speak about the future of concentrated solar power at a technology conference to be held later this week. The conference’s goal is to foster European expansion and partnership agreements for select companies focusing on energy, technology, entertainment and media, telecommunications, security, and other emerging technology fields. The conference is for U.S.-based companies seeking to expand their distribution to Europe, and is by invitation only. 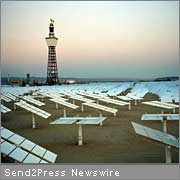 Mr. Murphy earned a BS in Astronautical and Aeronautical Engineering from Purdue University and was honored in 2005 with its Outstanding Engineering Award; he also earned an MS in Systems Management from the University of Southern California.

“In the age of skyrocketing oil and natural gas prices, SolarReserve’s technology will help us meet the ever-increasing worldwide demand for power while reducing our dependence on fossil fuels,” said Murphy. “This clean technology for converting the endless supply of solar power into dispatchable energy will soon become the standard for power generation around the world.”

The California Tech Showcase is part of a larger World Investment Conference. The Governors of California and Texas are scheduled to speak, as well as dozens of government officials from countries all over Europe seeking to lure U.S. technology businesses to invest in the region.

About SolarReserve
SolarReserve is a collaboration between United Technologies Corporation (UTC), a Dow 30 conglomerate, and US Renewables Group, a California-based private equity firm focused exclusively on renewable energy. SolarReserve holds the exclusive worldwide license to build state-of-the-art Concentrated Solar Power (CSP) plants that use a molten salt system manufactured by HS Rocketdyne, a subsidiary of UTC.

SolarReserve’s CSP plants capture and focus the sun’s thermal energy with thousands of tracking mirrors, or heliostats, onto a central receiver – heating the molten salt to over 1000 degrees Fahrenheit. The heated molten salt then flows into a thermal storage tank where it is stored, maintaining 98% thermal efficiency, and then pumped to a steam generator, creating steam to drive a standard turbine to generate electricity.

This process is revolutionary because it allows renewable and dispatchable energy generation at a utility scale. It does not require any fossil fuels to maintain the system integrity, and therefore has zero harmful emissions.

As countries seek to develop and promote clean, renewable, independent energy resources at a utility scale, SolarReserve offers a breakthrough technology that is economically competitive with modern fossil fuel plants, and which is sheltered from future increases in the price of oil, natural gas, coal, and other fuels.

After, Inc. to Speak at the 10th Annual Extended Warranty and Service Contract Innovations Conference in Nashville Sep 12, 2019