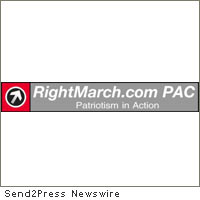 “Our proprietary internal polling of likely voters in Massachusetts this past weekend makes one thing very clear,” said William Greene, Chairman of the RightMarch.com PAC. “Joe Kennedy is siphoning off a large chunk of votes from Martha Coakley, the Democrat nominee for U.S. Senate.”

The special election, to fill the remaining two years of the late Sen. Edward Kennedy’s term, will be held on January 19th. Besides Joseph Kennedy (who is not related to Ted Kennedy), Coakley and Republican Scott Brown will also be on the ballot.

“In many ‘normal’ elections, when there is a third-party candidate like Joe Kennedy, he often takes votes from the Republican candidate,” said Greene. “But in this special election, we’re seeing that Republicans who originally weren’t going to vote are now planning to vote for Joe Kennedy, and more importantly, a large percentage of Democrats are also planning to vote for Kennedy – more than likely, because of confusion regarding his name. Polls are showing Coakley at below 50 percent now – it’s obvious that things would be different if Kennedy weren’t on the ballot.”

The RightMarch.com PAC is a Web-based, conservative political action committee, dedicated to giving hundreds of thousands of hardworking, patriotic Americans across the country a strong collective voice in the political process.

iBoysoft Kicks off 2019 Thanksgiving and Black Friday Promotion with Up to 50-percent Discount Nov 27, 2019