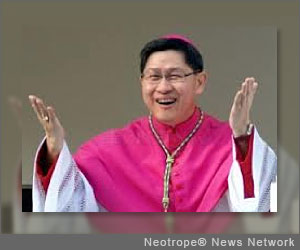 MANILA, Philippines /eNewsChannels/ — Only a few days have passed since the resignation of Pope Benedict XVI, and already speculation is rampant about his replacement. In Asia, those who are devoted to one of the prime candidates, Archbishop of Manila Cardinal Luis Tagle, have mounted an Internet campaign to share their support of his potential selection, according to Batangas Varsitarian.

On websites like they even post links to social network pages of members of the College of Cardinals, so that supporters can directly message the actual decision makers who will choose the next Pope.

There has never been a Pope from Asia, and no pontiff has been chosen from outside Europe for 1,500 years (since Gelasius I, who was from North Africa). Supporters of Cardinal Tagle believe that his selection would bring the world’s attention not only to the Philippines, home of 75 million Catholics, but to the vast number of Third World believers often ignored by Western media.

Says website co-director Eula Laki “We know the Church has their own selection process which is almost 2,000 years old. We have no idea if God supports using social media to affect this procedure, but we decided to put the information out there and let people decide what to do according to their own consciences.”

“If nothing else,” says Angelina Ramos, one of the effort’s founders, “We will be acquainting the world with the amazing works and character of this exemplary church father.”

Already the effort has brought together many expatriate Filipinos in learning about the revolutionary work the Church has done in the Archipelago in promoting education, health care, and poverty alleviation.

Though Cardinal Tagle is an accomplished humanitarian and scholar, as a Professor of Dogmatic Synthesis at San Carlos Seminary and winner of the Adelina Award for charity work, his youthful age (56) may work against him as a potential candidate for Pope. But the founders of the movement believe their work has already been successful in throwing a spotlight on the Catholic Church in Asia.

For more information go to .

Luis Antonio Tagle (Latin: Aloysius Antonius Tagle) (born June 21, 1957, in Manila) is a Roman Catholic Filipino cardinal, titular-archpriest of the Church of Saint Felix of Cantalice at Centocelle[1][2] and de facto Primate of the Philippines.[3][4] Appointed by Pope Benedict XVI, Tagle succeeded the Archbishop Emeritus, Cardinal Gaudencio Rosales. Tagle is also the Professor of Dogmatic Synthesis at the Graduate School of Theology of San Carlos Seminary, the archdiocesan major seminary of Manila, and an Associate Professor of Systematic Theology at the Loyola School of Theology of the Ateneo de Manila University.[5] Tagle is considered to be among those cardinals who can replace Pope Emeritus Benedict XVI in the upcoming Conclave.[6][7].