Contending that life is random, unplanned, and often hilarious, McFarland recounts 27 life events that all happened under the heading of ‘oops’

(COLORADO SPRINGS, Colo.) — NEWS: Colorado author Wayne McFarland breaks memoir mold with release of a hilarious, often moving 27-story chronicle of life events, like shark fishing in (ones) underwear, getting shot or blowing town with a monkey. The memoir is “Tales From The Day” (ISBN: 978-1645503347). 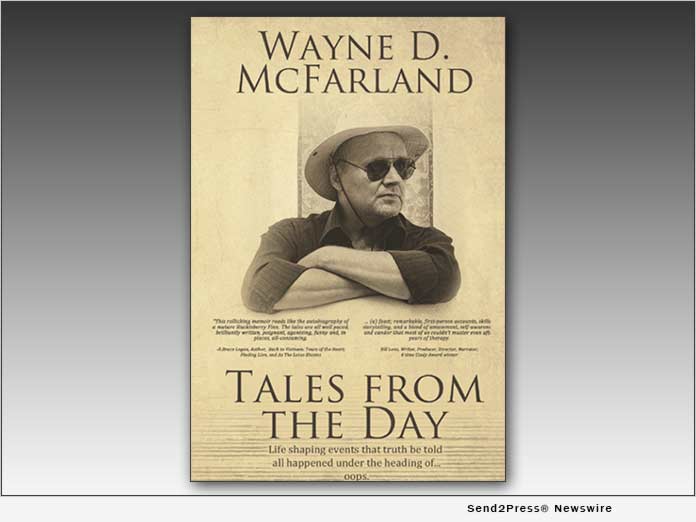 The currently accepted memoir format, for authors not already famous, is to establish a narrative arc. This arc usually begins with a rendition of “how life used to be.” Authors then usually move on to their involvement in such things as a war, mountain climbing, illness or a troubled family life. A tied together, “vignette” memoir form has been considered a modern-day formula for publishing failure.

“In general, memoirs really suck” begins author Wayne McFarland in his book Tales From The Day.

“This is not because they’re badly written, which they often are, but because they’re ‘me walls’ in prose. It’s an eye-roller that every aging ‘Honey I’m Home’ product of returning soldiers post WW II now thinks the world is desperate to hear about How Life Was. Really, no one gives a crap,” says McFarland.

Contending that life is random, unplanned, and often hilarious, McFarland recounts 27 life events “that all happened under the heading of ‘oops.'”

These “life events” include such humor filled chapters as “The Day We Pitched The Loan Shark,” “The Day We Blew Town With The Monkey,” and “The Day My Business Was Trashed By A Worm.” Other chapters cover in short-story form moving tales like “The Day They Tried to Kill Us In Arkansas,” and the losing struggles of a war veteran, “The Day Joe The Mo Fell Into A Hard Place.” Surprisingly, these disparate chapters, when taken together, form an arc of experience and “lessons” drawn, usually with humor, from seemingly unrelated, chaotic, and totally unplanned happenings.

In spite of McFarland’s departure from what is now pretty much accepted as the “memoir format,” reviews have been excellent and reader support enthusiastic.

McFarland says, “We live in an age now where people want to be able to delve into a book and get something solid out of it, chapter by chapter. Also, I have always believed that, given the choice, people would rather laugh than anything else.”

“Tales From The Day: Life changing events that truth be told all happened under the heading of ‘oops.'” is available through Amazon and Barnes & Noble.