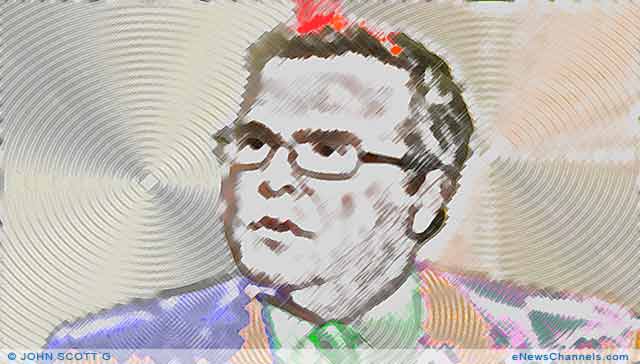 Jeb Bush, a millionaire with a rich kid’s typical anti-humane views, wants to be the American Taliban party candidate for president. To do so, he must win primary votes from a huge gaggle of stupid people. Two GOP insiders show Jeb what he must do to properly “stupidize” his already odious views.

As the time approached for my meeting with the two GOP operatives who provide input for this column, I did the usual things one does before coming in contact with conservatives: practice not looking appalled and stocking up on hand sanitizer.

Thus forearmed, I went to the home of a mutual acquaintance and met up with Skunkbreath and Wetpalms (not their real names). After listening to them exchange small talk about the delights of single-malt Scotch, Cuban cigars, and causing pain to children, seniors, veterans, and the middle class, I eventually interrupted and asked them to discuss Jeb Bush.

“You watch for the coming dumbing-down of Jeb,” said Skunkbreath. “He has to influence Republican primary voters in the moron-majority states, and simply spouting his rightwing views from fifteen years ago won’t be enough for him to win.”

“Absolutely,” agreed Wetpalms. “You can’t approach the typical Republican voter these days with anything even remotely resembling logic.”

“But he’s racking up a ton of donations,” I pointed out.

“Sure,” Skunkbreath said, “but that’s from the wealthy people who actually run the party. They almost always want to buy the most moderate rightwinger they can find. But ‘moderate’ has no place in the hearts of conservative voters anymore.”

“Okay,” I said, “let’s take some of the issues one at a time. What about foreign policy? Do you think Jeb should be among the ‘let’s invade everybody’ interventionist crowd or the Rand Paul isolationist wing?

“There’s only one way to go on that,” Skunkbreath said. “Bombs away!”

“Well, that’s depressing,” I said. But everything about Republicans is depressing, I thought to myself. “So,” I said aloud, “let’s discuss a few things about science. For example–”

“Jeb needs to be against it,” Skunkbreath said.

“He’ll probably say that evolution is just a theory and the teaching of it should be up to the states. And he’ll say that the jury is still out on climate change. As for math, he’ll probably keep trying to talk about Common Core standards for education. Big mistake.”

“But aren’t most Republican voters too dumb to even understand what Common Core is all about?” I asked.

“Yes,” Skunkbreath agreed. “They don’t know what it is but they know they’re against it.”

“Wait a minute,” I said. “Bush holds solid kuckle-dragger positions. He has moronic viewpoints and it seems like that should be fine-and-dandy with the typical troglodyte Republican voter.”

“That’s not good enough these days,” Skunkbreath told me. “You have to go ‘full retard’ in regards to Republican voters. Sorry, but Jeb is just too middle-of-the-road.”

“Wow,” I said. “I wonder what you’ll say about his views on immigration.”

“He’s got a real problem there,” Wetpalms said. “Anything approaching reasonableness could be a deathblow to his chances in the primary states.”

“Is there any way he could avoid that problem?”

“Sure,” Skunkbreath said, “start shouting about ‘deportables’ and how we need to build a bigger border fence.”

“But won’t that be seen as flip-flopping?”

“Oh, there might be some of that, but Jeb can seal the deal by saying he’s seen the light. Besides, the GOP’s moron base will forgive him if he shouts his nonsense loud enough.”

“Okay,” I said, let’s move on to regulations that preserve air quality, water quality, food safety, drug safety, and so on.”

“Why not? These are important matters.”

“Sure, but that’s not the point. Conservatives don’t care if people get sick and die as long as corporations and millionaires make money from it. So you don’t talk about how regulations assure breathable air and drinkable water. Instead, you say something like ‘Onerous and costly big government interference is strangling business and sending American jobs overseas.”

“But that’s not accurate,” I pointed out.

“You’re not listening,” Wetpalms said in exasperation. “Accuracy doesn’t matter to conservatives. Money matters to them. Profits. Coin. Wealth. If you die, they don’t care as long as Monsanto or Exxon or Dow or Northrop Grumman or any defense contractor or insurance company or healthcare firm makes a buck. So conservatives will only support to the campaigns of people who say things like ‘Down with gov’mint regulation’ and the like.”

“Oh. In other words, profits over people.”

“So,” I said slowly, “is it the same thing with science, medicine, and education?”

“Absolutely,” Skunkbreath said. “GOP candidates have to say they’re dubious about science, they have to make fun of scientists, they need to say they want to ‘free up’ the healthcare industry–”

“Which means profiting from sick people,” I interjected.

“That’s right. Hey, you’re coming around to the conservative mind-set.”

“Well, I’ll never ‘come around’ to something so inhumane and disgusting, but I’m beginning to understand it. The operative word is greed.”

“Stop that!” I said. They responded by grinning at each other and winking at me. “Jesus,” I muttered.

“Excellent!” Skunkbreath said. “That’s good. Always work Jesus into the conversation as often as possible. There is nothing GOP rubes and sheeple enjoy more than the invocation of the Christian deity,” Skunkbreath added.

“Yeah, it makes them all tingly,” Wetpalms added.

“Gives ’em a hard-on is what it does,” Skunkbreath murmured. They both laughed and gave themselves a high five. “Praise Jebus!” they shouted at each other.

When their chortling died down, I continued: “The wealth and income gap in the United States has us on the verge of turning into an oligarchy. The GOP is seen as the party of plutocrats, out-of-touch with everyday Americans. How does Jeb deal with that?”

“He doesn’t,” Wetpalms told me. “Look, you probably know very few so-called ‘everyday Americans,’ but we know herds of ’em. We get paid to manipulate these idiots. We mention god, and the flag, and morality, and family values, and Christianity–”

“Right, and we tell them that liberals want to take their guns, raise their taxes, and remove prayer from public discourse.”

“More of the standard GOP crap.”

“Right, plus lots of code words and phrases. The ‘dog whistle’ statements like ‘urban voter’ and ‘inner cities’ and ‘undocumented’ and a whole lot of stuff that every rightwing nutjob knows means that blacks and Hispanics are going to rape their daughters, sell dope to their sons, and destroy their property values.”

“Right, and we mix all that in with words that these morons have been taught to hate: Socialist, Communist, Liberal, and so forth.”

“Words that most Republicans cannot correctly define,” I pointed out.

“Right, but they know from years of repetition that they are supposed to boo and quake in their red-white-and-blue jockstraps whenever those words are used,” Skunkbreath said.

“You betcha,” Wetpalms added. “And that way — presto — the working person votes against their own best interests and helps the Koch brothers, helps Art Pope, helps the DeVos family, helps Walmart and McDonald’s, helps Sheldon Adelson, helps the millionaires and billionaires, helps the corporations, and screws the country.”

There was a long painful silence in the room. “That’s depressing, demeaning, and sickening,” I said at last.

“That millionaires, billionaires, and corporations are padding their bank accounts at the expense of the poor, the ill, the elderly, students, veterans, and the entire middle class. The people in the ‘one percent’ are destroying America.”

“True, but there’s a great upside,” Skunkbreath said with a smile.

“The one percent gives us big paychecks.”

They were smacking their lips as they high-fived each other again.