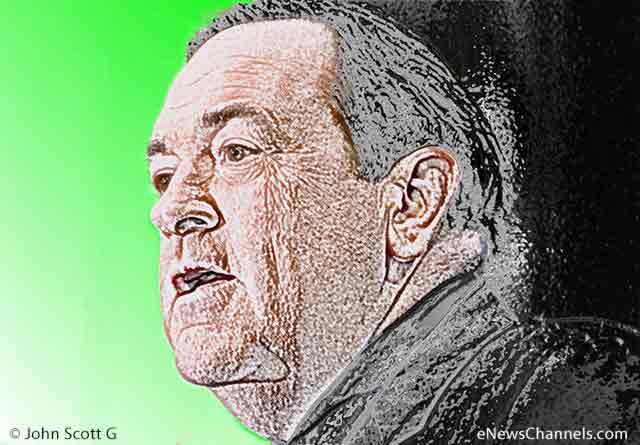 In literature and the movies, there is a romantic haze surrounding the silver-tongued con man but the reality is grittier: the bilker filches money from the innocent or unwary. When such a flim-flam man runs for president, the whole country should be alarmed. Meet Mike Huckster.

When in the course of human events it becomes necessary for one person to remove a sum which has been connected with another and assume the ownership of said funding, the laws of chicanery and of nature’s fools entitle the flim-flammer to hide behind every little twist and turn of mankind’s legalities.

We hold these truths to be self-evident, that all men are created equally susceptible to swindling, that they are endowed by their creator with certain unalienable rights to squirm and bemoan their fate as they move forward with less money to enjoy life, liberty, and the pursuit of as much happiness as they can afford until their next fleecing.

Thus begins the creed and credo of one Michael Dale “Mike” Huckabee, former 44th Governor of a state of the Old Confederacy and current bunco artist extraordinaire.

Huckabee is a fairly typical rightwing scumwad who appeals to the great mass of the unwashed, the untaught, and the unthinking. With calls for more guns and less science, more religiosity and less reality, Huckabee is a hero to those with logic disability.

And as with all Conservatives, the man cannot discern the difference between freedom and license. (Just as a reminder, you have the freedom to play the bass guitar but you do not have the license to do so at three in the morning. Or, in the fat Huck’s case, any time actual music is required.)

More stupidity spouted by the Tweedledumb from Arkansas:

* Homosexuality is a sin

* Heterosexual lust is a sin

* In an NRA appearance he joked about Obama ducking gunshots

* Believes “a wife is to submit graciously to the servant leadership of her husband.”

* He does not believe in evolution

* He thinks Adam and Eve were actual people

Huckabee is mentally deficient. Huckabee is a Conservative. But I repeat myself. However, the Huck is not so much a politician as he is a thimblerigger for dubious products. Take his endorsement of the “Diabetes Solution Kit” which claims to “stop diabetes in its tracks and actually reverse it.” Despite apparently not using it himself, the Huckster stated that “most people find within four weeks they don’t need any medication at all.”

In another video hyped by the Huck, diabetes is said to be removed by cinnamon and chromium picolinate, something that is denied by the American and Canadian Diabetes Associations.

In his newsletters, the Huckster has sold advertising space to firms pedaling bogus products. One example is the “Matthew 4 Protocol,” a bit of chicanery touted as a Biblical cure for cancer. The fake cure is available free, if by “free” you agree to take out a $72 subscription to a health newsletter.

Another example: subscribers to the Huck’s enewsletter were greeted by the subject line, “Food Shortage Could Devastate Country.” The pitch that followed urged readers to purchase Food4Patriots survival food kits. You know, for the coming collapse which is fictional unless Republicans take over the country and bring on an economic apocalypse.

Huckabee is a shill for an insidious line of “educational” products aimed at school children. Among the DVDs available in his “history without the history” series are the following pieces of crap:

Columbus and the Great Discovery — “…journey to Spain in the late 1400s to witness the exciting developments that led Christopher Columbus on his unforgettable voyage. As you travel back in time as far as the tenth century to witness Leif Erikson’s exploration of Canada, you’ll learn why Christopher Columbus earned his place in history for the discovery of the ‘New World’.”

Quite apart from how the description itself shows that Columbus did not discover a continent that was already discovered, there is no mention of his tricking and slaughtering the indigenous people of the land. Come to think of it, there’s no mention of our having committed genocide in our push for Manifest Destiny.

The American Revolution: The Birth of a Revolution — “…discover how the American colonists joined forces to revolt against British taxation and oppression, ultimately leading to the Revolutionary War.”

The title of this little opus apparently came directly from the Department of Redundancy Dept.

The American Revolution: Winning Our Freedom — “Come along for the ride and discover how General George Washington and his minutemen braved harsh winters and fought until the bitter end to secure our independence!”

Well, considering that our nation was the result of the struggle, perhaps it shouldn’t be called “the bitter end.”

The Supreme Court — “In this important film, young viewers will join the time travelers as they go back to understand how the Supreme Court developed and how its presence and impact are felt throughout the nation even to this day.”

Wait, “even to this day” — WTH is that all about? That suggests there is a douchebag Conservative movement to eradicate the Supreme Court. Oh wait, we’re talking about douchebag Conservatives so of course there is such a movement. There is no mention in this epic film of the racist and anti-American decisions by the five human turds currently on the bench.

America’s Veterans: A History of Our Greatest Heroes — “…kids will learn how America’s veterans represent the very best of what the United States stands for—courage, heroism and honor.”

World War II: America Under Attack, Victory in Europe, The Pacific — “… see bravery, courage and teamwork, as the U.S. Military worked together to stop the Nazis and inspire future generous to protect liberty around the globe.”

Reportedly there is scant mention of Franklin Roosevelt in these tortured versions of World War II.

The Reagan Revolution — “Join the time traveling kids as they journey back in time to the 1980s when Ronald Reagan reinvigorated America and restored pride in our Nation! In this exciting film from Learn Our History, you’ll discover how Ronald Reagan’s work impacted the entire world, serving as the driving force behind the fall of communism, the tearing down of the Berlin Wall and the end of the Cold War.”

The video forgets to mention how Reagan’s policies almost bankrupt America while beginning the Republican attack on the middle class. Nor is there any mention of Reagan trading arms illegally. And there is no reference to the 138 Reagan administration officials who were investigated, indicted, or convicted for official misconduct and/or criminal violations. This is the only area in which Ronald Reagan is outstanding: his perfidy is the worst ever (the total number for Nixon — a man so criminal he had to resign and be pardoned by his VP — was eight).

One Nation Under God — “…helps children understand how all of our rights and freedom come directly from God, not the government.”

So this one is based on a lie right from the start. The drivel continues with “It’s a great way to help your children understand how God and the Holy Bible have influenced our world… learn how America embraces our God-given freedoms and how God impacts our daily lives as Americans.”

On the off chance that some a-hole parents are reading this at the moment, the disgusting bilge of “One Nation Under God” is offered free. (You will be charged for shipping and handling. And if the online complaints about the Huckster’s products are any indication, you might find yourself billed every month for merchandise you did not order.)

And for the support of this Declaration, with a firm reliance on the protection of Convoluted Laws and Shyster Attorneys, we mutually pledge to others our Lies, our Fabrications, and our sacred Pursuit of Lucre.

Note to the ex-governor: See those angry hornswoggled villagers armed with torches and pitchforks? You’ve fooled them for now but one day, Mike, they will be coming for you.