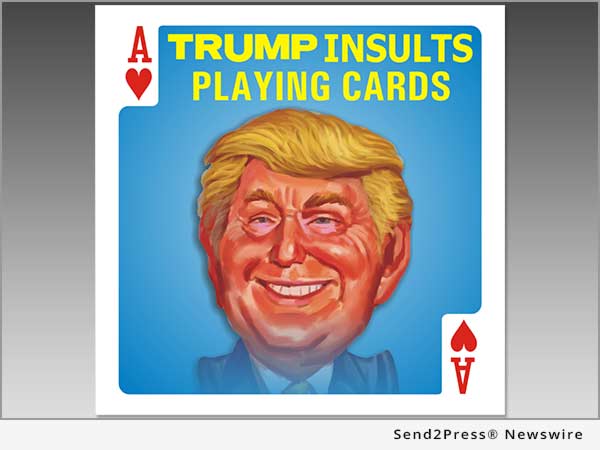 NEW YORK, N.Y. — Quantum Results is excited to announce the launch of the Trump Insults Playing Cards on Indiegogo, 54 full color caricature cards of the people in politics, entertainment and the media whom Donald Trump has insulted. Our cards include drawings of Hillary Clinton, President Obama, Ted Cruz, Bernie Sanders, Rosie O’Donnell, Kim Kardashian, Madonna and even the Pope. All of the major former Republican Presidential candidates are pictured, accompanied by Trump’s insults. Do your part to Make America Great Again.

The Trump Insults Playing Cards have been launched as an Indiegogo campaign here: https://igg.me/at/JdUenH7uJoU/x

Don’t let your friends trump you. Be the first in your card playing clan to own a piece of history. Bring Trump Insults Playing Cards to your next card game or gathering and start some stimulating conversation or even heated debate. Now you can collect the greatest collection of Trump Insults. Some you may be familiar with, but many will surprise you.

Art Glass, President of Quantum Results says: “Trump Insults Playing Cards will have you start spirited discussions about Trump and politics while playing cards with your friends. Even if you are not a Trump fan, you can enjoy his insults aimed at politicians, entertainment figures and the media. Each card includes the quote of the insult, the date, and where it was said.”

These cards are beautifully drawn with lots of personality, colorful backgrounds and have detailed patriotic flag backs.

There has never been a candidate quite like Trump and there are no card decks that offer you the exquisite and playful artwork of the people Trump has insulted as this one does. Trump proverbially likes to hold all the cards and now you can too!

The Trump Insults Playing Cards makes a great gift, collector’s item and conversation starter. You will love these cards. Your friends will say: Where did you get those cards?

We will be launching the complete collection of insults in the Trump Insults Playing Cards ebook, release date soon.

Quantum Results specializes in caricatures of politicians and entertainers.