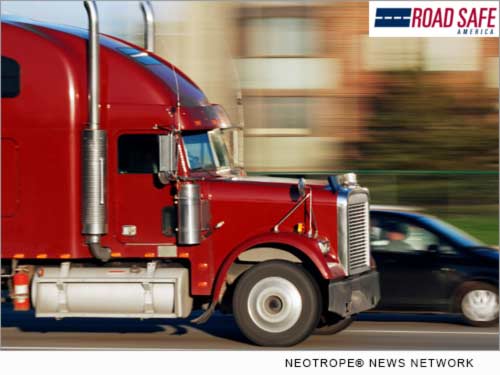 SAN FRANCISCO, Calif. /eNewsChannels/ — NEWS: Road Safe America applauds the passage of a resolution on commercial trucking by the U.S. Conference of Mayors at their 83rd Annual Meeting today. The resolution calls for collision avoidance requirements for Heavy Commercial Vehicles (HCV), elimination of legal Schedule II opioid drug use by HCV drivers, and a deadline for raising the minimum insurance requirements for the trucking industry.

“It’s a tragedy when people are hurt or killed in needless crashes with heavy big-rigs,” said Steve Owings, President and co-founder of Road Safe America. “Support by the U.S. Conference of Mayors is helping to raise awareness of this important issue and helps gain additional national support, and for that, we are very grateful.”

Over 4,000 motorists die annually in HCV involved crashes and over 100,000 are injured. Approximately 1,000 HCV crashes occur daily in the United States, each one resulting in a multi-hour economic paralysis event.

The use of comprehensive collision avoidance systems has been shown to effectively help avoid the most violent type of truck crashes, when trucks drive into the back of passenger vehicles. The National Highway Traffic Safety Administration (NHTSA) found that requiring this technology would be extremely cost-effective.

It is currently legal to operate a tractor-trailer while using schedule II opioids, with verbal, undocumented, permission from the prescribing professional. The Large Truck Crash Causation Study conducted by the U.S. Department of Transportation found that the most commonly cited contributing factor when a truck driver was seen as contributing to a crash was prescription drug use.

The insurance minimum of $750,000 per crash was set in 1980 and has never been increased, even for inflation. The effect of this minimum requirement has diminished significantly as inflation has occurred, which is especially dangerous since trucking occurs 100% of the time on public roads.

Road Safe America applauds the U.S. Conference of Mayors for addressing these important issues that impact truck safety. The resolution was passed by unanimous voice vote.

Road Safe America is dedicated to reducing the injuries and deaths resulting from collisions between tractor-trailer trucks and passenger vehicles by effecting change to improve safety on America’s Roadways. RSA is supported by private donations and has no financial ties to the transportation industry.

The organization is pro-safety. Steve Owings and his wife, Susan, founded Road Safe America in 2003 after their son, Cullum, was killed when his car – stopped in an interstate traffic jam – was crushed from behind by a speeding tractor trailer going eight miles per hour above the posted speed limit on cruise control. Since that tragic event, Steve and Susan have worked to make our highways safer for all travelers.

Registration Open for The First Ever San Diego Truck Pull to Support Move For Hunger and Nationwide Food Insecurity Feb 3, 2020