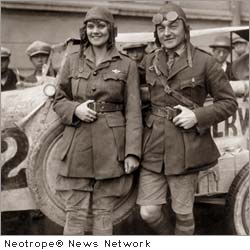 LONG BEACH, Calif. /eNewsChannels/ — Mobs surrounded the courthouse in 1933, where beautiful blonde adventuress, Aloha Wanderwell, was being questioned in the murder of her husband. “Once suspected as a German spy, world-traveler Walter Wanderwell was tabloid fodder long before his murder,” says Richard Diamond, of AlohaWanderwell.com. Walter hobnobbed with Hollywood royalty, and ditched his wife to marry his young “ward” Aloha, now the center of international intrigue.

This December 5th marks the 79th Anniversary of California’s most renowned cold case: The Wanderwell Murder.

A former seafarer, world class hiker and traveler who had been briefly jailed in the U.S. as a spy during the war, Wanderwell began his international expeditions in 1919 as an effort to promote world peace and the League of Nations. Founding an organization he called the Work Around the World Educational Club (WAWEC), Wanderwell lured young men and women with the promise of romantic adventure. One such conscripted youth, Aloha, captured the married Wanderwell’s attention and soon became the second Mrs. Wanderwell.

When not cavorting with stars such as Mary Pickford and Douglas Fairbanks, the Wanderwells toured Africa, India and war-swept Europe, gaining notoriety and even numbering a British Lord among their crew. Lord Edward Eugene Fernando Montagu, son of His Grace the Duke of Manchester, was aboard the Wanderwell’s yacht, The Carma, in the Long Beach harbor the night Walter Wanderwell was shot.

But Aloha was not on board. Heralded as the first woman to drive an automobile around the world, the beautiful widows’ whereabouts sparked a media frenzy amid rumors of espionage, fraud, and sex that rivals any contemporary scandal. With headline coverage in The NY Times, Detroit Times, LA Times, and the Long Beach Press Telegram, the 1932 murder of Walter Wanderwell remains one of the greatest unsolved murder cases of the 21th Century.

http://AlohaWanderwell.com is an online archive, dedicated to promoting the story of exploring pioneer, Aloha Wanderwell, and preserving the historic Wanderwell Expedition’s Nitrate Films, photographs, collectibles, and documents of all their Expeditions.

As the first woman to drive around the world and the first woman to fly Brazil’s Mato Grosso, Aloha Wanderwell captured the world’s attention with her beauty, her bravery, and her extraordinary kindness. Her film, “FLIGHT TO THE STONE AGE BOROROS,” was the earliest filmed record of the Bororo tribe and stands today as an important anthropological resource within the Smithsonian Institute’s Human Studies Archive.

Established in 2010, Aloha all so has to her list of films “Car and Camera around the World” taken during their travels.

AlohaWanderwell.com has partnered with CMG Worldwide, to provide information about and licensing opportunities for the Wanderwell Expeditions saga.

Champ Kennels: A Dog Breeder to the Stars in Los Angeles Mar 9, 2021