SALT LAKE CITY, Utah — Keeping the forces of darkness away from his patients for the past twelve years has given cardiac nurse and published author, Paul Genesse an insight into what it takes to be a hero. He is constantly inspired by the strength and determination of his patients and the nurses that he works with on the night shift at a large hospital in Salt Lake City. Genesse draws from his real life experiences seeing people at their best and worst as he writes fantasy novels about dragons and the heroes who face them. “The Golden Cord, Book One of the Iron Dragon Series” (ISBN: 1594146594) is his debut novel from Five Star Books with a cover by world famous artist Ciruelo Cabral. All five books in the series are written.

Genesse will be discussing his novels, the nine short stories he’s sold and his career as a nurse as he embarks upon an upcoming book tour. He has already visited New York as a guest of the I-Con convention in April and the rest of the tour will take him to over a dozen cites where he will be speaking at schools and libraries, as well as doing book signings. He’ll soon be making appearances in Salt Lake City, Reno, San Francisco, Antioch, Sacramento, Riverside, Orange County, Phoenix, Las Vegas, Denver, Chicago, Indianapolis and several other cities. 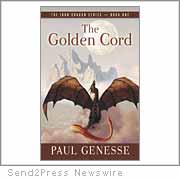 About Genesse’s novel, Library Journal writes, “[The Golden Cord] promises to unlock a realm of magic and warfare in a unique world of cloud-bound lands and a mysterious Underworld.” Voya Magazine says, “The plot is well constructed, the characters are wonderful, and the middle-ages setting creates an ominous feel. The cliffhanger ending will leave readers eager for more . . . Book One of the Iron Dragon Series is a rich and compelling fantasy full of adventure, danger, dragons, battles, revenge, magic, and more.”

The Golden Cord is an epic fantasy in the tradition of Terry Brooks, J.R.R. Tolkien, and Anne McCaffrey for ages 11 and up. In Book One of the Iron Dragon Series the dragon king rises, and a hunter must leave behind the woman he loves, give up all hope of survival, as he is forced to guide his most hated enemies on a suicidal journey to the lair of the dragon king.

For a full media kit visit the author’s website at http://www.paulgenesse.com.

Author Paulina Kay's book, 'True Joy for the Retired' reveals breakthrough in unleashing the power of appreciation, love and… Nov 12, 2021

The family of late author Dolores F. Kurzeka is thrilled to announce the release of 'Our Walk with Grandma' Dec 13, 2022