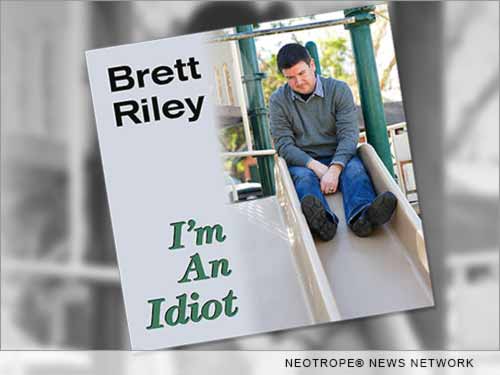 HOLLYWOOD, Calif. /eNewsChannels/ — NEWS: Uproar Entertainment is pleased to announce the release of Brett Riley’s first comedy CD, “I’m An Idiot.” Riley’s signature impersonations, witty observations, and colorful stories incite bouts of laughter from the start. “I’m An Idiot” was recorded at The Comedy Underground in Seattle and is Riley’s first recording for Uproar Entertainment.

Brett Riley is not a fish out of water; he’s his own portable aquarium and the contents of this aquarium are colorful and plentiful. An accomplished comedian and vocalist with an endless grab bag of stories, observations, opinions, and impersonations, Riley is a crowd favorite in every kind of comedy and entertainment venue.

Believing he was born to entertain, Riley accepted a scholarship to Oklahoma City University for Music Theatre. He quickly realized that he was indeed meant to perform, just not music theatre. After sneaking into comedy clubs with fake IDs, getting booked as the house emcee, and winning Wichita King of Comedy 2004, it became obvious that he needed to hit the road and take it to the next level.

That meant jumping right into the big time – L.A.! Riley didn’t waste any time proving himself there, claiming the Funniest Comic in the City 2007 title within 6 months of his arrival in the big city, thus leading to his appearance on Judge Joe Brown to collect the prize money.

After a car accident almost claimed his life in September 2008, Riley quickly bounced back to claim the title at the Roc Da Mic Comedy Competition Compton, Calif. 2009. Most recently named “Best of Fest” at the San Luis Obispo, Calif. Comedy Festival, Riley’s performance was also featured on Sirius/XM Raw Dog Radio 2013 and on Hulu under CandorTV.

A farm boy from Wichita, Kansas with the heart of a soul singer, Riley is one of the most original fresh faces to come to light in the comedy world. With the swagger of a rock front man and the likeability of a college drinking buddy, this walking “series of unfortunate events” takes the audience on a personal tour of the Brett Riley view on everything from pop-culture, relationships, family, and advice on how to mess with people, and couples it with the ability to sing well enough to make your mom forget the other stuff that comes out of his mouth.

“Brett Riley is a classic example of ‘don’t judge a book by its cover.’ You think you know him until the first words come out of his mouth. Multi-talented, intelligent and drop dead funny – he’s a force to be reckoned with in the comedy world,” says David Drozen, President Uproar Entertainment.

About Uproar Entertainment:
Uproar Entertainment is committed to recording and promoting today’s most talented comedians. Under the helm of David Drozen, the man who discovered Richard Pryor in early 1970, signed him to his first recording contract, and produced 12 of his albums for the legendary comedy label Laff Records, Uproar nurtures, supports and develops the best comedic talents of our time.

Golden State Pops Orchestra and Chorale present their Return to the Stage with the annual 2021 Holiday POPS Spectacular Oct 15, 2021