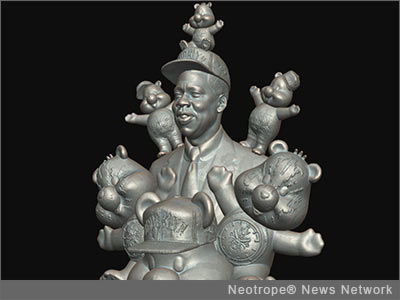 NEW YORK, N.Y. /eNewsChannels/ — NEWS: With ‘Brooklyn Monument: Jay Z Cares’ pop-artist Daniel Edwards depicts Jay Z as a Care Bear pal with Funshine Bear on the rap mogul’s shoulder wearing Leather Boxing Shorts from the Barneys New York collection, accompanied by six designer ornaments to be auctioned on eBay, with a share of the proceeds going to an organization that supports the ACLU’s policies against racial profiling.

The work will be unveiled online this week, announced Cory Allen Contemporary Art.

“With the Barneys controversy, I felt Jay Z was being victimized. He was the only person associated with Barneys who was being criticized for not breaking ties over their racial profiling policy, which is not fair,” said Daniel Edwards.

“A Brooklyn-conscious ‘celebpreneur’ hired Daniel to design a line of ornaments that Jay Z wanted to include with his collection, but Barneys New York wanted to feature only clothing,” said Cory Allen of Cory Allen Contemporary Art.

“We are still searching for an organization with which to share proceeds. We are inspired by the ACLU’s Campaign Against Racial Profiling,” said Cory Allen.

All trademarks acknowledged. No brand or celebrity endorsement claimed or implied.

Summer Camp for Mompreneurs Comes to Brooklyn with Mompreneur and Me Jul 2, 2019