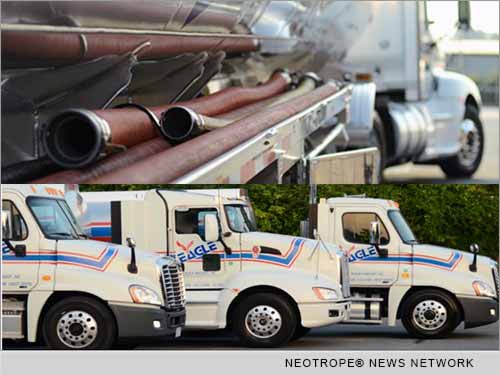 Bill will remain with Eagle until early 2016, helping with the leadership transition, and focusing on a few timely projects as he completes his illustrious career in the trucking industry.

As Eagle’s Chairman Don Stallings said “You might say it’s the end of an era, but it’s also the beginning of a new one. 14 years ago, John Thomas retired after leading Eagle Transport to a highly regarded pedestal in the industry. Bill George came aboard at that time, and the growth and progress has continued. To say the least, Bill’s tenure and leadership with Eagle has served us all well. History records the accomplishments of Eagle during Bill’s time with us. From 260 trucks to 440; from 700 employees to over 1000, are just a few of the milestones achieved over the last 14 years.”

Lance Collette’s promotion from VP/Operations to the Presidency of Eagle is certainly well-deserved. Lance has served the Eagle family for over 6 years, and is the right man to lead Eagle’s journey over the next few decades.

As Mr. Stallings pointed out “Herb’s 25 plus years as ‘an Eagle’ makes him uniquely qualified to continue this leadership role. He will continue to champion the National Accounts as well as become more involved in the major management and strategic decisions for the company.”

Joe Duncan’s role will be that of Senior VP Finance/CFO. He will work closely with Lance and Herb going forward on all things financial and major corporate decisions.

In summing up Bill’s management philosophy, Herb pointed out that Bill “always boiled down the way Eagle ought to be run by a ‘3 point mantra’: Work hard, work smart and good things will happen; Don’t be afraid to fail — or to succeed; and in all things, try to have a little fun.”

The 14 year tenure in which Bill guided Eagle saw the company improve and grow to levels that few believed possible. His focused leadership and guidance charted the course for the next generation of leaders to follow, and Eagle Transport is poised to capitalize on the foundation of excellence Bill has built.

KLLM Transport Services Rolls Out One of the Largest Driver Pay Increases in Company History Dec 1, 2020