“Ohio consumers know they have a friend in Troubleshooter Joe Pagonakis,” comments Jim Scott, NewsChannel 5’s interim news director. “They also know that when we say On Your Side, we mean it!” 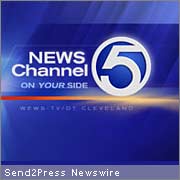 Pagonakis, part of the NewsChannel 5 Investigators, aired Troubleshooter reports which included a couple from Macedonia who hired a contractor to build an in-ground pool for their family. They paid him $25,000, and in the end, he left them with nothing but an eight-foot hole in the ground. Another case involved an elderly woman who hired a man to repaint her home. She paid him $2,000, but he never returned.

Troubleshooter Joe has been responding to the needs of consumers throughout northeast Ohio since April 2007. Just this year, his reports have saved viewers $85,000 in goods and services.

As Senator Spada began work on the legislation, he learned just how widespread these type of cases are in Ohio. In fact, in 2007 alone, the Attorney General’s office received 2,068 complaints from Ohio consumers. Senate Bill 275 provides more opportunities to hold fraudulent contractors accountable and to recoup losses under the Consumer Sales Practices Act (CSPA) and through providing more protections on the front-end that will help consumers weed out the bad contractors from the good and hopefully, to avoid these situations altogether.

Specifically, SB 275 provides that for construction jobs that exceed $1,000, there must be a written contract between the homeowner and the individual doing the work and the contractor in these situations will be required to maintain general liability insurance of at least $250,000. Contracts made between homeowners and contractors must specify details of work to be performed, costs, dates, information about the contractor, including their address and tax identification number, a “right to cure,” which gives the contractor a short window to correct any mistakes to the homeowner’s satisfaction before a dispute becomes a matter for the courts, and other information. Once the terms of the work have been agreed to, the contractor must provide the homeowner an estimate of any excess costs that may arise and is prohibited from misrepresenting any aspect of the transaction, from the nature or quality of the work or materials to the cost of the project.

Under SB 275, failure to comply with these provisions and other existing laws, can be considered an unfair or deceptive act and a violation of the CSPA. The CSPA was crafted in 1972 to prohibit deceptive, unfair, and unconscionable sales practices in consumer transactions and serves as a strong deterrent to fraud as those found guilty could be liable for roughly three times the amount of the financial damage they inflicted.

“At a time when our economy has slowed, costs are up and many families are struggling just to stay in their homes, we can least afford to ignore the deception and fraud of those who would take money from homeowners and fail to live up to their side of the bargain,” Spada said.

“Everyone who has been involved in the crafting of the legislation before you today was moved by the dozens of homeowners who wrote letters or came in to testify about their experiences and there was unanimous agreement that something had to be done,” Spada said. “SB 275 answers their concerns by ensuring that homeowners enjoy the protections of the Consumer Sales Practices Act, that prosecutors have adequate tools to bring these unscrupulous contractors to justice and that the consumer has a much better chance of entering into a fair contract or of recovering their losses if they are deceived.”

Senate Bill 275 is supported by the Ohio Attorney General’s Office. Having passed the Senate, the bill now goes to the Ohio House for further consideration.

The company’s portfolio of media properties includes: Scripps Networks, with such brands as HGTV, Food Network, DIY Network, Fine Living, Great American Country and HGTVPro; daily and community newspapers in 18 markets and the Washington-based Scripps Media Center, home to the Scripps Howard News Service; 10 broadcast TV stations, including six ABC-affiliated stations, three NBC affiliates and one independent; United Media, a leading worldwide licensing and syndication company that is the home of PEANUTS, DILBERT and approximately 150 other features and comics; Shop At Home, which markets a growing range of consumer goods directly to television viewers in roughly 55 million U.S. households; and Shopzilla, the online comparison shopping service that carries an index of more than 30 million products from approximately 55,000 merchants.

The Otherness Podcast is a narrative exploring and engaging autism through experienced stories from those who have lived with it Feb 23, 2022