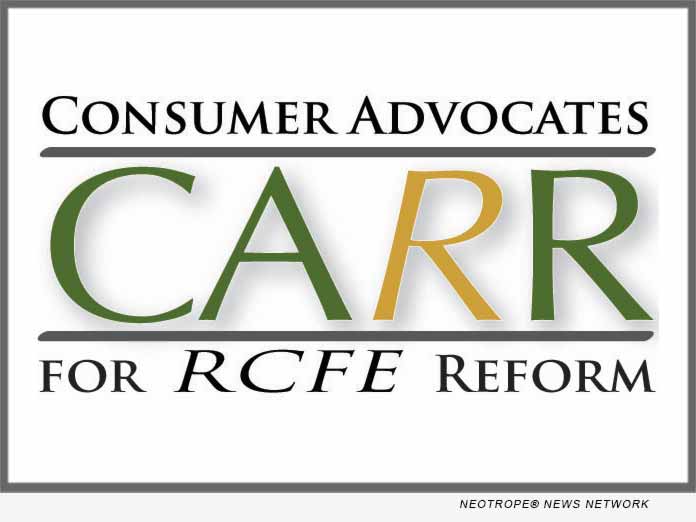 CARR has been funded to create an innovative board game based on the “8 Domains of Livability” framework used by the AARP Network of Age-Friendly Communities, and is designed to engage older adults in the process of making San Diego a more age-friendly city.

Christina Selder, CARR’s Principal Investigator underscores the value of this program: “Our goal for the game is to engage community members in discussions to rethink San Diego’s senior housing and care models in terms of age-friendliness. CARR’s focus is assisted living advocacy; we believe many of the 8 domains of livability are directly relevant to improving the lives of assisted living residents.”

CARR’s Executive Director, Chris Murphy notes, “This is the second significant grant the organization has received this year; earlier CARR received a grant from the San Diego Foundation to investigate accessibility and affordability of assisted living in the region.”

About CARR:
Consumer Advocates for RCFE Reform (CARR) is a San Diego-based 501(c)(3) not-for-profit organization specializing in public document research (www.rcfereform.org) on assisted living facilities, and the state’s oversight of the industry. CARR is one of two First Amendment Coalition’s 2014 recipients of its Free Speech and Open Government Award. In 2014 CARR sponsored AB 1523 (Atkins) requiring assisted living facilities to carry liability insurance; the bill was signed into law in August 2014. CARR continues its evidence-based advocacy work for the benefit of Californians.

AY Young, founder, Battery Tour, was named by the UN as one of 17 Young Leaders for the Sustainable Development Goals

Steiner Realty, Inc named a 2020 Winner of the Pittsburgh Top Workplaces Award for the Second Year in a Row